James Lye is one of the better-known inhabitants of Market Lavington in times past. He earned renown as a gardener at Clyffe Hall where he worked for the Hon Louisa Hay. No doubt at some time we’ll return to the source of his fame, which was fuchsia growing.

James Lye also won an award for a new variety of potato, which he developed. The medal, awarded to celebrate three hundred years of the potato, is now at Market Lavington Museum. 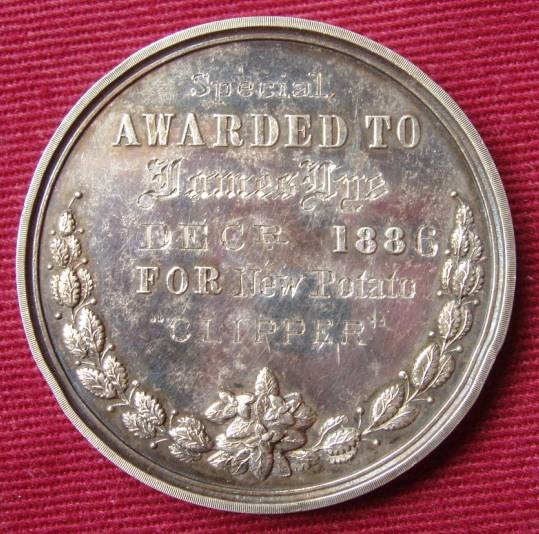 Reverse of medal won by James Lye for his potato variety, 'Clipper' 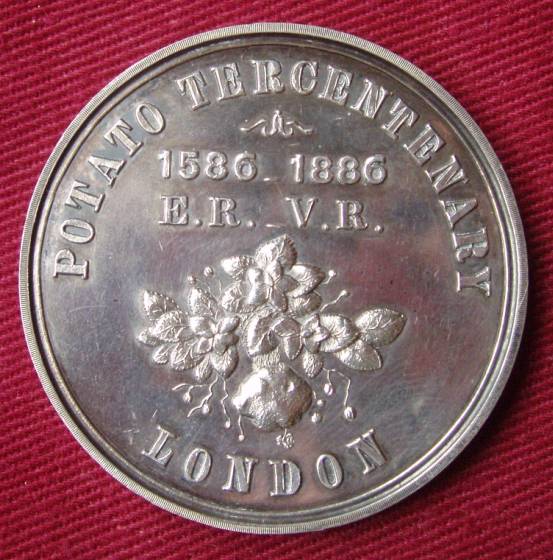 His potato variety was called ‘Clipper’ and if anybody knows anywhere to obtain any, we’d love to grow them at Market Lavington.

But what about James Lye’s life? He was born in 1830 in Market Lavington and baptised at the village church on 22nd August. His father, Richard was a labourer and he and his wife, Ann, had a large family.

Inevitably, we know nothing of his early life. He may have been a boy servant at Cornbury Mill in 1841 but as a word of warning for family researchers, the 1841 census for Market Lavington and Easterton has not survived.

By 1851 James was married to his wife Maria (née Smith) and a daughter had been born. The young family lived on Northbrook in Market Lavington and James was earning his keep as a gardener.

In 1861 James was listed as ‘Gardener to the Hon Mrs Hay’. The growing family lived on White Street in Market Lavington

In 1871 James was living, no doubt very conveniently, at The Lodge, Clyffe Hall – on the spot for his gardens and greenhouses. He was there for at least the next twenty years but by 1901 James had retired and he and Maria had moved to Oak Lane in Easterton.

Both James and Maria died during the reign of King Edward VII. They are both buried in Market Lavington churchyard.