This account of the life of James Neate was written by a descendant – Patrick Lee who lives in New South Wales, Australia 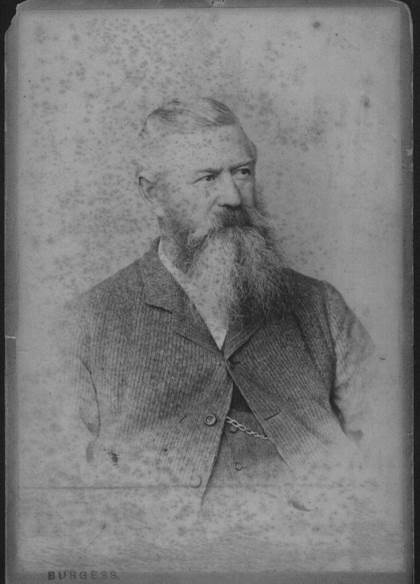 James Neate – a photo by Burgess of Market Lavington

James was born in 1829 at Caversham, Oxfordshire and died in 1920 at Devizes, Wiltshire.

“Misleading information brought one young would-be entrepreneur from Reading, Berkshire, to Market Lavington in mid-century. This was James Neate, who had had a casual meeting with a railway engineer who had a map showing that the proposed extension of the western railway from London to Bristol would pass through the village, with the railway station to be sited in Church St opposite St Mary’s. Neate had raised the money to purchase a property in High St by 1852 but before he discovered the true facts. Nevertheless he opened “The Brewery Tap”, a small brewery in White St which also supplied wine and spirits; and his good ale, in nine, 18 and 36 gallon casks, selling for sixpence a gallon at harvest time, was very popular. Customers were served through the window of “The Tap” and drank their beer on the pavement. Neate prospered but died in 1920 at the age of 91, after which, by wish of the family, the business was closed down and the brewery demolished.” When I visited England in 1998, I found this account in a book titled “Village Under The Plain – The Story Of Market Lavington”, (Bedeguar Books, Wiltshire, 1995), splendidly written by a local Market Lavington historian, Brian McGill. The village of Market Lavington sits on the edge of Salisbury Plain, the site of prehistoric Stonehenge and of some defining battles throughout English history.

After the “The Brewery Tap” was demolished, the site was soon converted to tenement housing. In McGill’s book there is a wonderful photograph of Norman Nunney Neate, a son of James, posing in the brewery grounds with two jolly-looking Canadian soldiers during the First World War. Norman, who had a shooting accident as a young man, leaving him partly disabled and requiring a wheel-chair in later life, managed the brewery for some time before his father died. 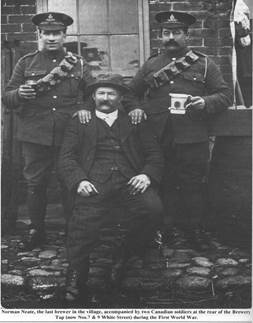 A local newspaper article dated 21 June 1857, which referred to James as “Jasper” Neate, announced to its readers that he established “The Brewery Tap” in Market Lavington, near Devizes, Wiltshire in 1852.

Some of James’s business ventures were not smooth sailing. In The London Gazette, 27 July 1866, it is recorded that the Chief Registrar of the Court of Bankruptcy registered on 25 July 1866 trust deeds for the benefit of creditors, nominating debtor, James Neate of Market Lavington, Wiltshire, ale and porter brewer and wine and spirit merchant and the deed trustees as chemist and druggist, Charles Crook of Hungerford, Berkshire, John Hazell of Market Lavington, and Thomas Neate of West Lavington. Thomas Neate might have been a brother or cousin of James.

The London Gazette, 26 March 1872, also records the dissolution of a partnership to carry on business as brewers and wine and spirit merchants, which was signed by James Neate and John Stratton and dated 20 March 1872.

James and his family resided at what was known by locals as “The Red House” in Market Lavington. The Kennett District Council in its Market Lavington Conservation Area Statement July 2002 reports on the architectural and historic character of local buildings. On “The Red House” it states: “Nearby is the 19th century Kings Arms one of the three public houses. This has a yard entry to the side against the Red House, a former farmhouse of 17th century origin, now of red brick with stone mullioned windows. Some windows to the street are blocked where the interior accommodation also has a rear aspect to the garden and access off The Clay”.

James is the rifleman referred to in the report in the Westminster Herald, 1 September 1866, of which I have an original copy, and on the silver cup and pewter mug in the possession of Pamela Lee (nee Poole). Peggy Gye, a Market Lavington family historian, informed me that Qr. M. Sgt. Neate was my great-grandfather. The silver cup is inscribed: WILTS RIFLE ASSOCIATION, Presented by THE MOST NOBLE THE MARQUIS OF BATH, President of the Association 1866. The pewter mug is inscribed: 7th WILTS VRA, Given by Lady Charlotte Watson Taylor August 1873, Won by Qr. M. Sergt. Neate.

When James died in 1920, probate of his will was passed to his son, Frederic James Neate.

The Market Lavington Museum has a wealth of information and photographs about members of the Neate family, including photographs of James’s personal rifleman’s helmet box and of stoneware jars used by him, in “The Brewery Tap” on its internet site. Go to: www.marketlavingtonmuseum.wordpress.com