James Neate was a brewer and retailer of alcoholic drinks. He was born about 1829 in Oxfordshire, but by 1861 he was married to Martha and living on High Street in Market Lavington where he had a brewery.

Over the years, the family grew. One of his children, Norman, took over the business and became the last commercial brewer in the village.

The censuses from 1861 to 1901 show that James had become a long term Market Lavington resident. He became a member of the Loyal Volunteers and had his own trade tokens made. We have examples of these in Market Lavington Museum.

In fact, the museum’s newest acquisition is one of James Neate’s 2-gallon stoneware jars.

This jar joins a little collection of very similar jars for we already had two James Neate jars, not to mention a couple of barrels, in the museum. 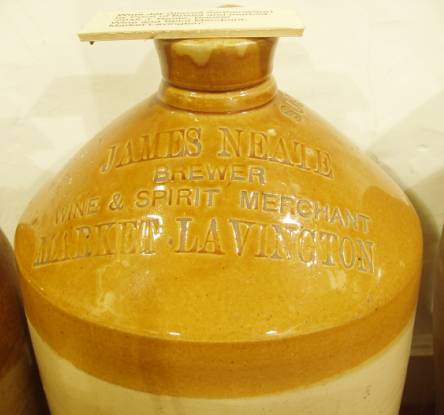 Martha died in 1898, but James lived until he was aged 90, in 1920. Both are buried in Market Lavington churchyard.

Sadly, we do not have a photograph of James at Market Lavington Museum although we have a good collection of items associated with him and his business. We’d love a photo. Can you help?