About a month ago we featured a paper bag we had been given. This bag told us it was used by J Sheppard of Tip Top Bakery in Easterton. At the time we said it would be good to have a photo.

And as a result, we have not one photo but four delightful, period images. They are too good to use up on one blog post so we’ll look at them one at a time.

Today’s photo is of the man himself – Jim Sheppard and his assistant. 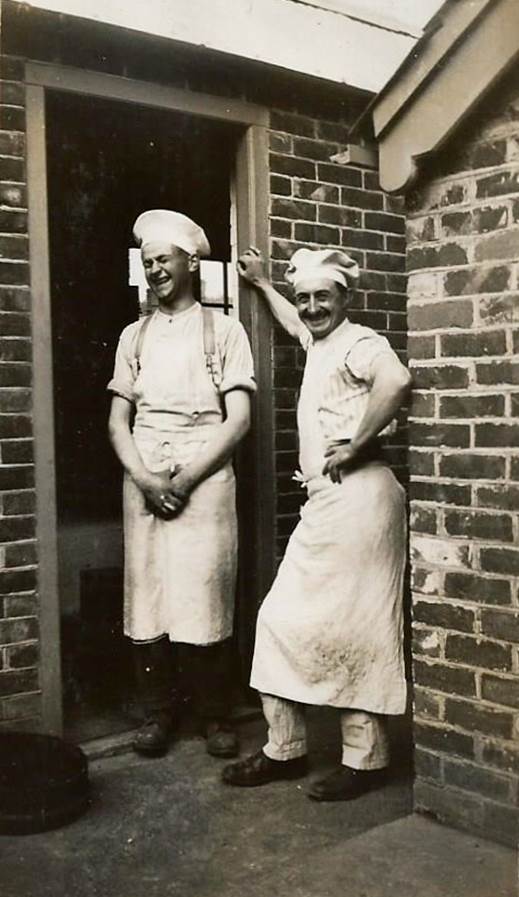 Descendants of Jim have come up with the following rough chronology for Jim.

Jim Sheppard came to Market Lavington as a qualified baker to work for Waltons.
He then moved to All Cannings to work for Mullings.
He came to Easterton in 1926 and rented a bake-house, now demolished, at the bottom of the High Street.
In 1927 he bought 1 Jubilee Cottages, which already had a wooden garage. He built a brick bakehouse behind the garage and installed a steam oven. At a later date he demolished the garage and replaced it with a brick garage with loft above it which was used to store sacks of flour.
This bake-house was next door to Coleman’s bake-house. Easterton supported 2 bakers.
In 1945 Jim sold the thriving business to Mr Cotton, the baker at West Lavington.
For a period of time after this Jim lived at Easterton Sands and was village postman.

On the left we have Chris Cooper, who was an employee of Jim’s and on the right is the man himself. That’s Jim (or James or Jimmy) Shepherd of Tip Top Bakery, Easterton. He is standing outside his bakehouse at 1 Jubilee Cottages, Easterton.

By the early 1950’s 1 Jubilee Cottages had reverted to a private house.

We can add a little more to this. James Sheppard was born around 1896 in Wiltshire. From census data we think this was at Grittleton. His father was James – a groom/gardener and his mother was Mary. James had an older sister, Mary and a younger brother, William.

By the time of the 1911 census his sister had departed from the family home which was then at Castle Combe. 15 year old James had an occupation then. He was a baker.