John and Sarah Clelford are buried in the Drove Lane cemetery in Market Lavington. 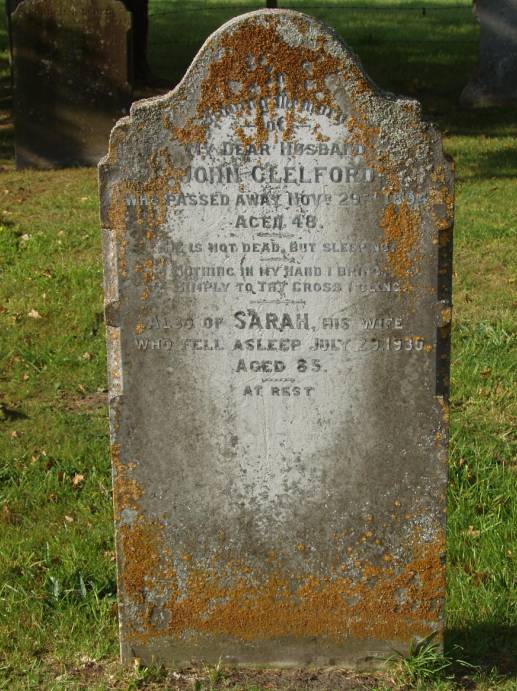 Grave of John and Sarah Clelford at Drove Lane Cemetery

He is not dead but sleeping

Nothing in my hand I bring

Simply to thy cross I cling

John Clelford was born on 9th June 1846 and baptised at Market Lavington on 1st June 1851. His parents were George and Sarah Clelford.

In 1851 the enumerator has given the family the surname Culford but four year old John (written Jn) lived in Easterton with labourer father George and mother Ann. John was the third of the four children at home.

In 1861 John was the scholar son of cordwainer George Clelford and his wife, Sarah. John was the second of four children and the entire family had been born in Easterton. The transcriber on the website we use has the surname as Melford.

Sarah Davis was born around 1845. She was probably the daughter of Richard and Ann. This family can be found on the 1851 census on White Street, Market Lavington where Richard was a labourer. Sarah Jane (as she was called) was the third of six children in the home but I speculate that the older two had a different mother.

In 1861 Sarah was still with her parents at The Hollow, White Street, Market Lavington. She had employment as a washerwoman.

In 1881 John and Sarah lived on Windmill Lane, Market Lavington. John was a market gardener, aged 34 who had been born in Easterton. Sarah was 35 and had been born in Market Lavington. Ann Davis, aged 74 and a widow born in Easterton was listed as the step mother of John – a pauper. Also in the house was Rebecca Spiers, aged 8, a niece born in Cheverell.

In 1891 John and Sarah along with niece Rebecca Spiers were still on Windmill Lane in Market Lavington. To confuse things, the transcriber has given them the surname Clifford and also allocated the home to West Lavington.

In 1901 Sarah, a widow of no occupation lived alone on Northbrook, Market Lavington.

In 1902 Sarah married Thomas Spiers and they lived together in Easterton at the time of the 1911 census.