His day job was as a dealer and worker in ‘light’ metals and enamelled goods. Sometimes such workers were called Whitesmiths. His premises were immediately opposite what is now the Coop shop, just to the right of Woodland Yard. Many locals will remember this building being an ironmongers or hardware shop.

John was very involved in many aspects of life in the parish, not least by being a sharp shooting member of the Loyal Volunteers. Our picture shows him in that guise. 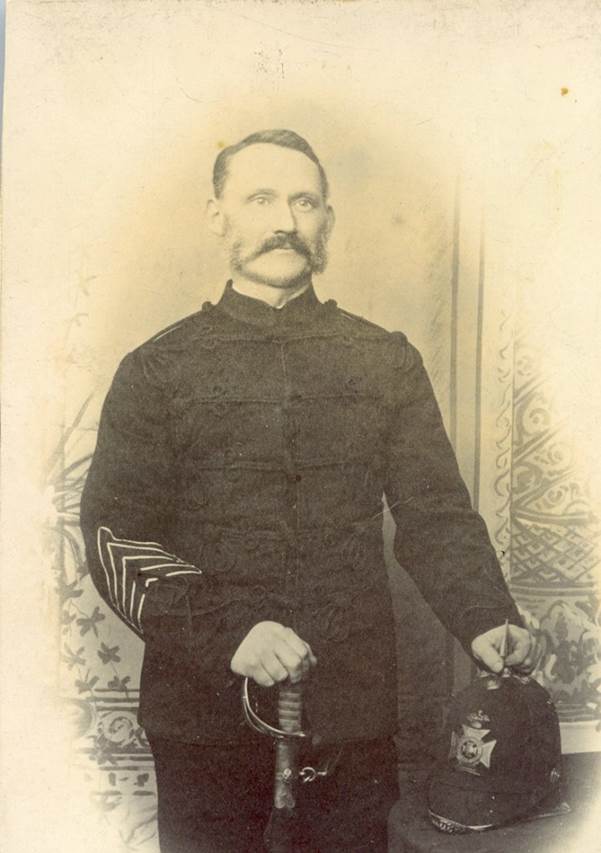 John Baker of Market Lavington in about 1890

One of his descendants gave this description of this photo.

John Baker in the full splendour of his Colour Sergeant uniform in the Wilt’s Militia. He was quite a famous “shot” and won many splendid trophies at such places as Bisley. Like his father he was also a whitesmith- that is a dealer in light metals – tin and enamelled goods. He had a forge in the market place and at time fulfilled orders for the armoury located on Salisbury Plain. He was secretary for the Parish Council and a collector of the parish rates. He also kept the parish church clock in repair, my mother having on several occasions gone up the tower with him when repairs were necessary. He was on ardent collector of fine books, furniture and artefacts, interests he shared with his favourite nephew Joseph Sainsbury.

John was born in about 1844 and sadly, died rather young in 1903. Perhaps as a result several of his young adult children set off for new lives in Canada. The Baker family have remained very interested in their Market Lavington home and have donated many items to the museum.