John Davis was born in Easterton in about 1862. Easterton was then a tithing of Market Lavington. John’s origins were ordinary enough for his father was a farm worker. In 1871 they lived on White Street in Market Lavington and by 1881 young John was lodging on the same street and his occupation was listed as a mason.

In 1891 John was married to Mary and the couple lived in West Lavington. John was a market gardener.

Perhaps things went well, for by 1901 John was a corn miller and coal merchant, working for himself. His address was Lavington Mills on the edge of West Lavington. Mary was with him, as was her father, Thomas Shore and a servant. Perhaps our corn sack dates from this era. 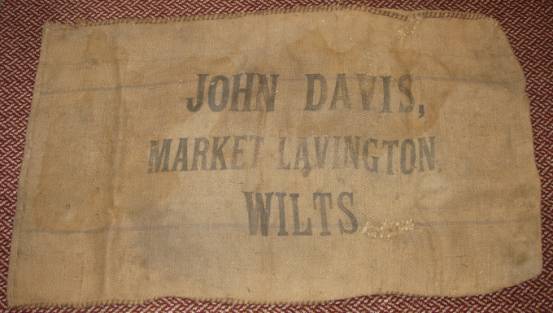 Ten years on and we find John and Mary on High Street, Market Lavington with John as a coal merchant. We have a small (OO Gauge) plastic model railway truck to commemorate that era.

Davis and Co Coal Truck in OO Gauge and mostly of plastic. This item is housed at Market Lavington Museum

The firm of Davis and Co was in operation (at 50 High Street, Market Lavington) until at least the 1950s. The truck represents an earlier era for it carries the GWR letters and the old Great Western Railway lost its identity in 1948.