We recently showed a picture of the Sainsbury family at Parham farm in the Fiddington area. The photo was taken in the 1880s and John Sainsbury, the farmer, was not in the photo. Today we’ll make good that omission by showing a photo, probably taken on the same day, of John with cows, at the farm. 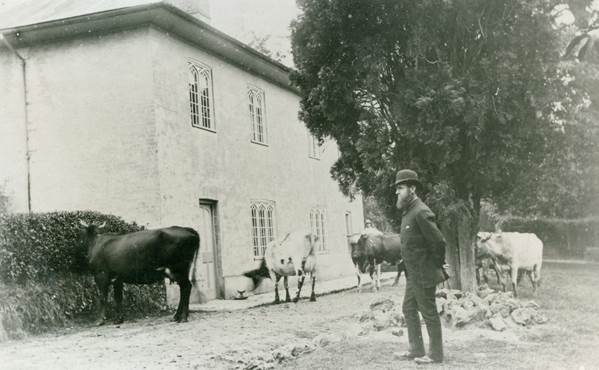 John Sainsbury at Parham Farm in the 1880s

This farm fell foul of the new railway line when it was built at the end of the nineteenth century. It no longer exists. We believe the photo dates from the 1880s John was born in about 1847.

Sainsbury has been a very common name locally and of course, John is also common. We can’t be certain which John this is but it could be that his parents were James and Harriett who lived in Easterton which was, then, a part of the parish of Market Lavington. As a teenager, John may have been a servant working for a family in Imber. We think John married Elizabeth Giddings in 1868 and that he died in 1909.

Maybe somebody out there can tell us more.