John Smith (one of many with the name) was a youngster in Market Lavington in 1796. He had a work book, mostly for mathematics which he was clearly proud of.

This work book was found in the 1960s when Market Place buildings were demolished to make a car park for the Wiltshire Agricultural Engineering Company. For some years the book belonged to a person in Cheverell. Later, a person in West Lavington held it. This week it has been given to Market Lavington Museum. John Smith’s book has come home.

It looks surprisingly modern – an ordinary exercise book as used in schools.

The work certainly shows the complicated arithmetic that youngsters were expected to perform in those pre-decimal days. Each section starts with a conversion table – this one for dry goods.

This is interesting, of course, but perhaps the personal messages and doodles are most interesting. 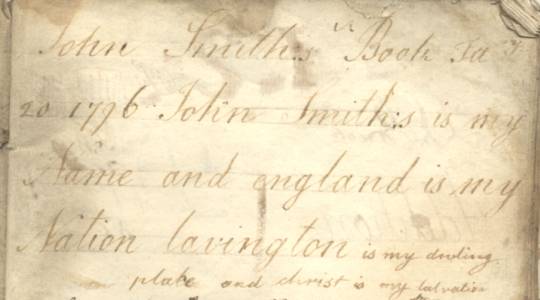 John Smith introduces himself - with a little help

It looks as though young John ran out of steam and his message has been completed by another hand.

The writing looks very careful. The doodles, perhaps, give away John’s youth. 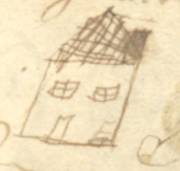 Was this John’s house? 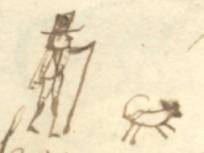 Was his father a shepherd?

Sadly, it will be hard to find out because John Smith is and was a common name. At least four suitably aged John Smiths were born in Market Lavington itself. But this book makes a fascinating addition to the Market Lavington Museum collection.