For much of the information here we must thank Sheila Judge who did the research into the Williams family who lived at Easterton Manor. 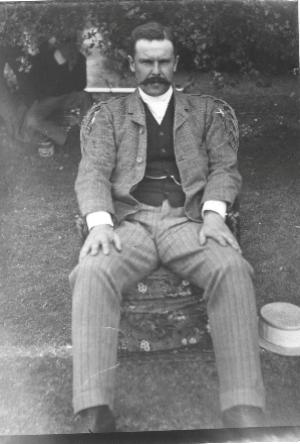 John William Morgan Williams  was born on October 9th, 1853. His father died suddenly in his 50s in 1885 and John became the owner of Easterton Manor. Let’s quote Sheila Judge.

John William Morgan Williams, inherited Easterton Manor, and all the estate and outlying properties. He was still a bachelor, he worked in a bank in a nearby town, and he was as fond of travelling as ever. He had matriculated at Pembroke College in 1873, and doubtless enjoyed his time at college to the full. By that time, photography was a recognised skill, and there are pictures of the  young John W.M. Williams as a young man, so it is possible to see what he looked like. In fact, he was a very handsome man, tall, dark, and well built, with an attractive and compelling expression

His features were well defined, he had dark eyes and a decidedly Roman nose, and very well groomed dark moustaches. He was attractive to the ladies, a fact he enjoyed and probably exploited, and they seem to have been fascinated by him. The year after his father died, “young John”, as the village thought of him, went to the Isle of Jersey, on holiday. There he met a very lonely young lady, Florence Letitia Giffard, and later in the year he married her, in Jersey, on October 5th, 1886. She was an outstandingly beautiful girl, and it is not surprising that he gave up his bachelor state for her. They returned home to Easterton. Florence had not visited the Manor previously, and so it is hard to know what she expected to find in her new home. Stories have it that she found the place neglected, very old fashioned, and in need of up-dating and re-decorating, plus new furnishings.

The Williams family grew with the birth of children between 1887 and 1900.

Mr. & Mrs. Williams had lived well, and spent money freely since their marriage in 1886. They travelled, spent time in London, and visited and entertained locally. When Gwen was old enough, her mother took her to Jersey to meet her relatives there. The family had a good social standing, and the parents were a popular couple.

Sheila Judge paints a picture of a downward turn in the quality of life. John suffered something of a breakdown in 1920 and his fondness for women caused a bit of a scandal and a law case. His wife stood by him and did what she could to keep the household running without the income that might have come from the farmland which the family had once owned.

John died in 1942. He still has descendants in the Easterton area.