For many of us, ‘Just Married’ was something that got lipsticked onto the back window of your car before you could drive away from your wedding reception. Along with that, people tied tin cans to the car so it made a noise which drew huge attention to it.

These days people don’t seem to drive away from weddings in their own car. There are usually two receptions and it is late at night before the celebrations end, so that tradition has become a thing of the past. And when the wedding we show took place, so few people had cars that the tradition had not even started.

The just married couple we see today celebrated their nuptials in the spring of 1934 and was between Miss Dorothy May Burbidge and Mr Ernest Hill. Here we see the ‘just married’ couple leaving Market Lavington Church. 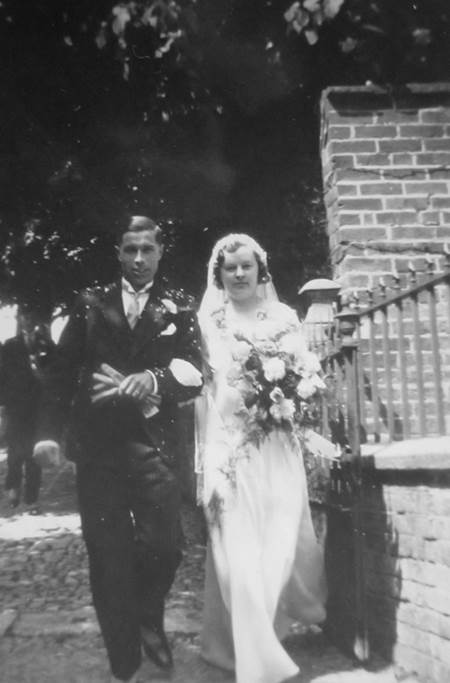 Dorrie, as she was known, had not come far for her parents and sister (she was bridesmaid) lived in a cottage adjacent to the churchyard – the cottage that is now Market Lavington Museum. Ernest had come a little further, for his family came from the Littleton Panell area of West Lavington. Dorrie had actually lived in Bristol for some years where she worked as a telephonist. Ernest worked for a Somerset company.

They weren’t going far either, for the reception was held at The New Inn which is now called The Drummer Boy and is opposite the church.

Later the couple left for a honeymoon in Devon. We guess they went by train and Devon was easy enough to reach from Lavington Station.

They made their home in Bristol but were regular visitors to the Lavington area.