Ladywood Lane, in Market Lavington,  is the one which runs from the roundabout at the bottom of Canada Rise to what we now call The Bubbling Kettle. It’s a footpath and has always been a popular walk. These days we tend to think of footpath walking as a leisure activity but of course at one time footpaths were used because people needed to get to the other end. The Ladywood path formed part of a route from the village to the manor. It also helped form a short cut route between Market Lavington and Lavington Station. It has been, and still is a well-worn route=way.

Part of the route is alongside the Northbrook stream. It means the path suffers a double whammy. It is worn away by the walking feet on top and by the flowing water to the side. Periodically, it needs repair.

One such occasion was in 1984. The old path had got very uneven and was horribly slippery when wet. Labour was available, due to high unemployment at the time so local young adults were offered the chance to earn some money working with a trainer and making good Ladywood Lane.

Our photo shows the team on Grove Bridge, with their very smart handiwork on their left. 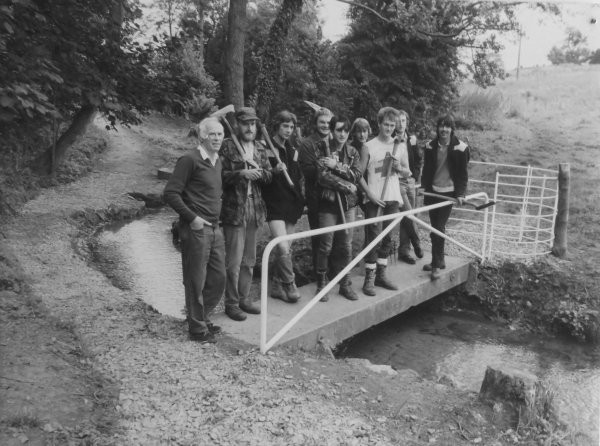 The only person we can name is the man on the left – the team supervisor, Reg Beedon. Maybe a reader can give us other names.

Looking across the bridge we can see that this was before the Grove Farm Estate was built. When people arrived, to live in the new housing, they had a lovely walk right on their doorstep. Not surprisingly, that attack of feet and water brought the same stretch of path into a poor state again meaning heavy repairs were needed a couple of years ago. These repairs incorporate a memorial to former chair of the parish council, Di Lunn, who loved the area.