First can we thank our readers for the 1571 views this blog received in February. It may be the shortest month, but it now holds the record for the best month for the blog.

And now that poultry club.

In the days before mass media entertainment – TV and the World Wide Web, small communities were much more dependant on their own resources than is the case today. Clubs and societies flourished, amongst them the Lavington and District Poultry Club.

In truth we know little of this group which probably appealed to the small scale poultry keeper, rather than the professional like Fred Phillips of Spin Hill. Back in the 1930s, it was even possible to get teenagers involved although in this case we are considering a teenager who had lost her mother and who may well have been attempting to run a house – and the domestic fowls that were kept. But this youngster still found the time to present her birds to a high standard, winning a Highly Commended certificate at the 1936 show. 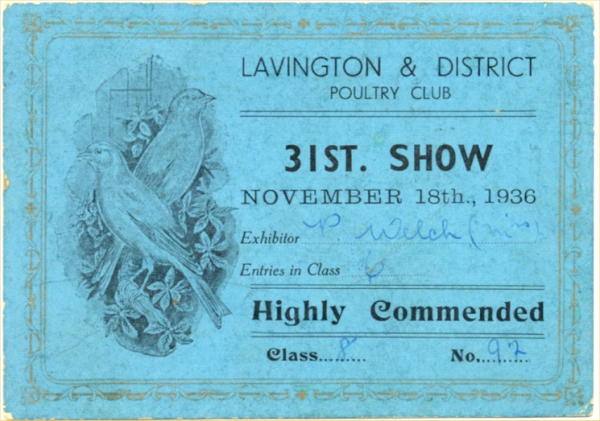 We can see that this show was the 31st such show organised by the club, suggesting that the first was in 1905, or possibly earlier if shows were not held during the years of the First World War. Our exhibitor was Miss P Welch. This young lady became much better known in the village as Mrs Peggy Gye amongst whose many achievements was the founding of our museum.

It is interesting to note that Peggy was exhibitor number 92. That, we believe, would mean that there were at least 92 people exhibiting poultry at the show.  Class 8, for which Peggy won this award had 6 entries.

As ever, we’d like to know more. Where were the shows held? Were there regular meetings? When was the club founded and when did it cease its activities? If you have answers then please get in touch with the museum curator.