David Bratchell recently visited the museum. He lived in Market Lavington as a youngster and attended the local school until he reached leaving age in 1957. The family moved away in 1959. His ‘Granny Smith’ remained living in the Market Place, Market Lavington. She had one of the new bungalows.

David did not come empty handed. He brought his certificate from the 1957 Lavington Area Schools’ Sports. 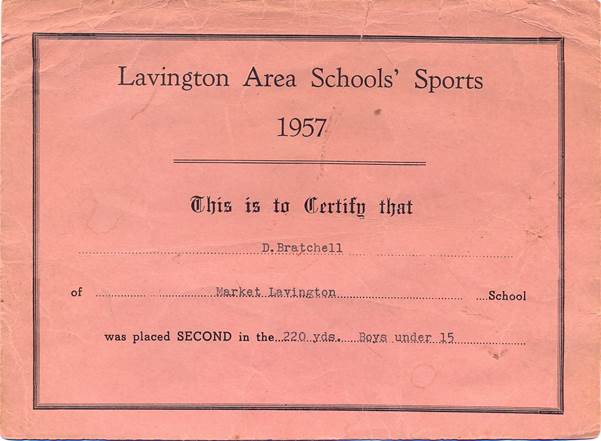 David’s memory is that these sports took place in West Lavington. David, of course, represented Market Lavington and managed second place in the 220 yards race for under 15 boys.

Times change. David left school at 15 – not now permissible and these days the race would be 200 metres. But of course, there couldn’t be a Lavington area schools’ sports for people in the under 15 category now, for one school, Lavington School, is the only state school for secondary aged pupils. Back in 1957 many village schools were the establishment for those aged 5 to 15.

So well done David, not only for running well in 1957 but also for reminding us of times past with this certificate.