In a recent conversation with Tom Gye, our secretary was told that Bristol glass blowers used to come to Lavington for snails. The reason for this was that eating snails was reputed to give glass blowers more puff.

It sounded an absurd story so our curator decided to contact the Bristol Blue Glass Company to see if there was any truth.

This was the reply.

Thank you for your email. After a brief conversation with a senior glass maker I understand that there is truth in the snail eating story. I am going to seek some more details, and see if I can locate any written references to this, and I will revert to you. My colleague tells me that, apart from anything else, snails were a cheap source of nutrition and became popular with the Romans arrival.

Apparently, there was a belief among glass makers that eating snails would help one expunge glass dust and other dangerous air borne pollutants involved in glass making.

Good old Tom! It seems there was truth in the tale he told.

Since then, the glass company have sent us a few web links which all point to glass blowers eating snails. Seemingly Italian glass blowers who arrived in the Pontefract area of Yorkshire thought snails helped ward off TB. Some reports say that Bristol glass blowers, who often called snails ‘wall fish’, definitely thought they helped ease the throat and helped with puff.

We do not know why Lavington was a chosen source for snails. Investigations continue.

But we’d better see a special Lavington snail. This one had taken its time to climb more than 70 centimetres up an allium spike. I do hope whatever it found at the top was good. 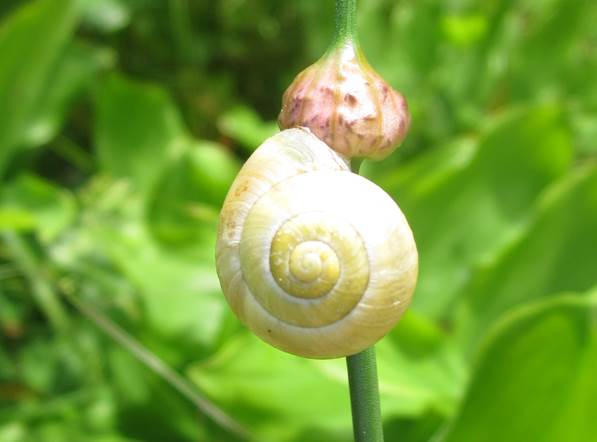 And of course, if you have more on this snail eating habit, then do let us know.

Can we offer huge thanks to the Bristol Blue Glass Company for their help and enthusiasm.