Lavington railway station is not in Market Lavington but it served the local community from its opening in 1900 until closure in 1966. Trains still race through, travelling between London and the Southwest of England.

Back in the 1920s and 30s, the old Great Western Railway ran weekend excursion trains to Lavington. The trains were met by a fleet of coaches – charabanc style – which took the travellers on to Stonehenge.

The coaches were supplied by the Lavington and Devizes company which was owned and run by Mr Sayer from the depot in Market Lavington market place.

A photo given to the museum shows the scene at Lavington Station on April 12th 1930. The train has arrived and is standing at the platform. The road up to the station is filled with Mr Sayer’s coaches and the travelling public are transferring on to them. 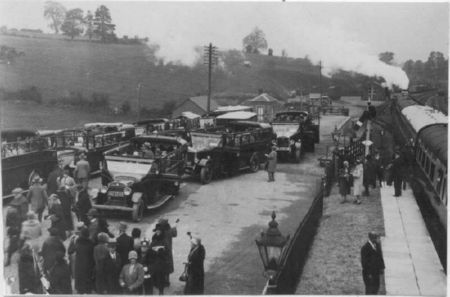 What a wonderful image portraying good times some 80 years ago.

The museum has many images of the railway which was one of the last main lines to be built – well into the photo taking era. Do come and visit the museum from May to October on Saturday, Sunday, Wednesday and Bank Holiday afternoons – or contact the curator to visit by arrangement at other times.