The scene we look at today might be said not to have changed much. At first glance, the view down Northbrook taken around 1970 looks totally familiar. Yet when you look in detail much has changed.

This was what things looked like a little more than 40 years ago. 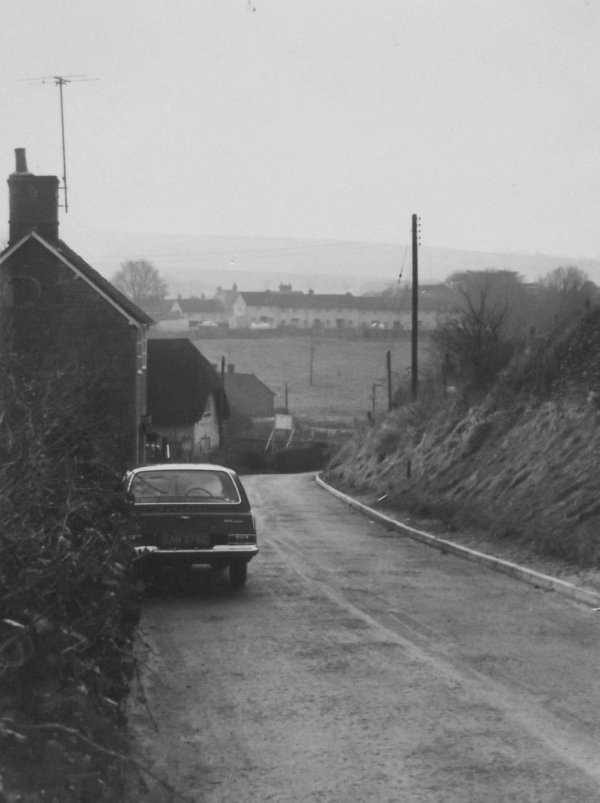 The view down Northbrook, Market Lavington in about 1970

The first house on the left, with the car outside, is Lilac Cottage. It is still there, but has grown extensions on either end.

On the right hand side of the road, the kerbed edge looks very new and the bank, which has the Northbrook Close houses atop, looks neat and tidy.

Further down thew hill we can see the thatched house, The Rest, which is still there and is visually unchanged. Beyond that we can see the terrace of four cottages that are just beyond the Northbrook stream.

It is further afield that the big differences show. On a grassy ridge there’s a terrace of pale coloured houses. These are 1960s built council houses built on a cul de sac off the Market Place. They are more or less unchanged but the grassy ridge now has Bouverie Drive built on it. It’s the area shown in yesterday’s blog but from a very different viewpoint.

A big difference in 2012 is that there is much more growth on the plants.

The view down Northbrook, Market Lavington in 2012

As we can see, the kerb on Northbrook is lost under the vegetation. Lilac Cottage is visible under its wisteria covering and features the present day curse for street scene photographers – a huge bin for recycling materials. The Rest is just visible but the distant view of the Market Place has gone.