Looking up White Street – Then and Now

White Street remains as confusing as ever. The three adjoining villages of West Lavington, Market Lavington and Easterton all have their own, quite separate White Streets. The name is simply based on the fact that these roads all led up to Salisbury Plain. These hills are composed of chalk which is white in colour. Before tarmac surfacing of roads, White Streets were white in colour.

Today it is the Easterton White Street we are looking at and we are taking a look up the hill, more or less from its junction with High Street – the main road through the village. Our first picture dates from about 1910. 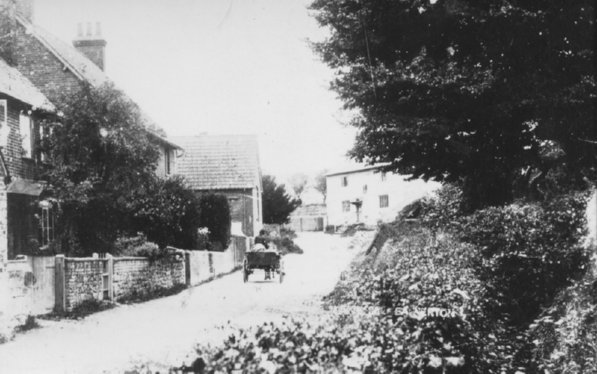 Back in 1910, we lived in a black and white world, as far as photos were concerned. Maybe White Street was white then, however. A small pony and cart are making their way up the hill. This could, perhaps, be Billy Davis who was a local rag and bone man.

The White building, facing partially down the street is Fairfield Farm. White Street passes to the front of it. The Clays turns right, just this side of Fairfield Farm. Incidentally, The Clays (named for geology) is also a potential source of confusion. Market Lavington and Easterton both have lanes known as ‘The Clays’.

In 1910, Fairfield Farm had had some of its antiquity hidden under a stucco finish. Parts of this building are more than 500 years old.

On the left of the street we see various cottages and barns. 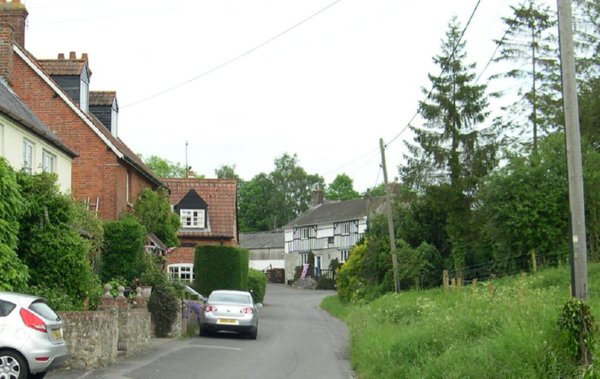 Perhaps photography has changed more than the scene. We have colour! Cars have replaced the little pony cart and electricity wires now do a little to make the scene untidy.

Fairfield Farm now looks like the old building it is, with the stucco removed and the beams on display. Also on display on the steps to the house is a big union flag. This was at the time we celebrated the Queen’s Diamond Jubilee.

What had been a barn, with gable end facing the street has had widows put in the roof and has been converted to a dwelling house. Cottages on the left have also gained roof windows, but otherwise, that left hand side is very recognisably the same place.

Thanks go to Jim, once again, for taking the new photo to match the old.