By the end of the nineteenth century much of Salisbury Plain, in Market Lavington and Easterton, had been bought up by the government for military use. Until about 1910, the area was farmed, but regiments came to summer training camps in the area.

London regiments would have arrived in the area by train. Until 1900, that would have meant leaving trains on the Devizes line at Patney and then marching from there to the hilltop camps. But in 1900, the cut off line from Patney to Westbury was opened, and with it, the new Lavington station. Soldiers could thus leave the train at this station and walk through the village of Market Lavington and then up the hill. Actually, this was probably not all that much shorter for it was still more than three miles from the station to the camp.

Market Lavington Museum has several photographs of marching soldiers. They were taken in 1909 and may well feature The City of London Yeomanry, a Territorial Army unit often known as the London Rough Riders.

Here we see soldiers marching up the hill in Market Lavington. 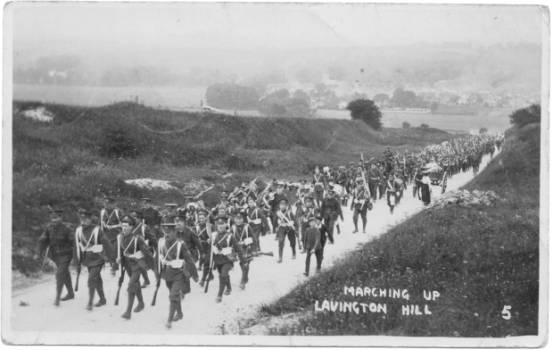 Market Lavington Church can be made out in the background. The destination would have been Pond Farm, which was, by then, in Easterton parish.  Pond Farm Camp was substantial enough to have its own postmark for letters. Again, Market Lavington Museum has many photos of the camp at Pond Farm. 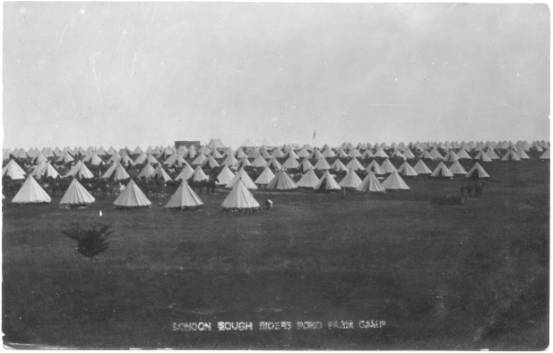 This one has been chosen on this occasion, not for its quality, but because it names the London Rough Riders as the regiment occupying the huge tented encampment in a desolate and windswept area of the parish, up on Salisbury Plain.