By 1820, the market in Market Lavington had been restarted and its committee produced a three page report on December 6th of that year. It sounds as though this was very much a corn market as no mention is made of other commodities.

A market porter had been appointed to assist with unloading and loading. There was a charge of 2d per sack (old pence, where 144 pennies = £1). Some sellers brought samples, rather than bringing all the corn they had for sale and the committee had provided a stand for the samples, though they preferred sacks to be brought by ‘those desirous of promoting the good of the market’.

Sacks featured rather a lot in this report and needed to be returned promptly. ‘Your Committee recommend that all sacks holding Corn sold in the Market, be returned in a fortnight, and if not returned in six weeks, to the Sack Office, Market Lavington, the seller of the grain, should demand of the buyer, value for the same.’

We have no sacks from this era, but we do have a later local hessian sack in the museum. See John Davis – Miller and Coal Merchant

As reported in our previous blog post The Market at Market Lavington our knowledge about the market is scanty. We do not know where the Sack Office was, but Brian McGill’s book about Market Lavington, ‘Village under the Plain’, informs us that there was a building in the Market Place where market tolls were paid and manor courts were held. Fortunately for the newly established market, our report states ‘ that the Right Hon, the Earl of Radnor, has relinquished the tolls of the market for five years, for which act of generosity, your Committee have communicated their thanks to his Lordship…’ 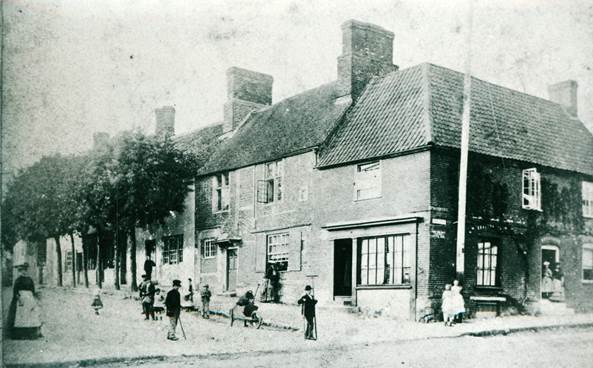 These buildings, on the corner of the High Street and Market Place, were demolished in  1960 and have been replaced by Rochelle Court. The one used for market business was immediately to the left of the shop on the corner. This early photo dates from the 1870s, about 20 years after the end of Market Lavington Market.

The corn market appears to have been an event of short duration on market days. ‘…The time for conducting the business of the market, be from Twelve o’Clock, till a quarter past One. The market bell to ring at the commencement, and at the close.’ Maybe there was food awaiting them at the Green Dragon, for the report says, ‘Your Committee recommend all attendants at the market, to transact their business as far as possible before dinner.

The committee felt that the market was doing well, despite ‘as dull a time for the sale of grain, as was ever known.’ Between 300 and 500 sacks of grain had been sold each market day and they were grateful to ‘the respectable growers of grain’ and ‘the respectable dealers in corn’ for supporting the market. The committee considered ‘that the business done at Lavington, has been done with as much advantage to the seller, as at any market in the County.’

The second part of the report concerns itself with transport issues, which we will look at in the next blog post.