It is good to report that, once again, Market Lavington has a Community Band whose first public performance was at the carols in the Old School just before Christmas.

Older people recall Market Lavington prize Silver Band which packed away its instruments in the 1960s. Today we are looking at that band in 1947, by which time John Merritt had been its leader for more than 50 years. The mounting of our photo, taken by Burgess Brothers of Market Lavington has suffered damage, but the photo itself is in good enough order. 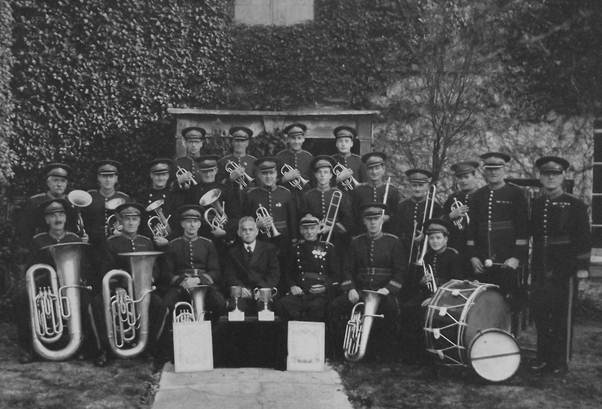 The photo dates from 1947 and was taken outside Beech House on White Street. Clearly cups had been won that were deemed worthy of inclusion in the photo.

When choosing this image for a blog page, we thought it was well captioned. Actually, it isn’t. The names attached to the back of this photo quite clearly don’t belong to it. It lists the people in four rows where, clearly, there are only three here. So having carefully started to transcribe the names onto this blog page, we had to stop.

We’ll now hope that somebody out there can give us names. Of course, there are some we recognise – like John Merritt sitting just right of centre as we look at it.

Even without names we have a handsome bunch of men (did they really exclude the female half of the population?) who look thoroughly proud of their status as bandsmen.