Regular readers of this blog will recall how pleased Market Lavington Museum was to receive the bass drum from the Prize Silver Band a few weeks ago. This led to a rapid rethink of some displays for 2010 – our Silver Jubilee Year. The drum how forms an eye-catching centrepiece for a display about some of the bands of Market Lavington. 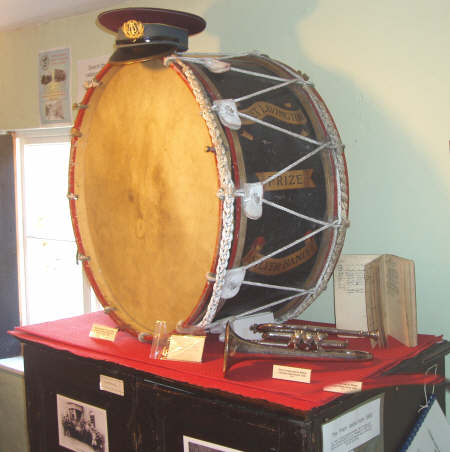 Our photographic records start with a band who performed in the 1870s. They were known as ‘The Rough Wallopers’ and they were of a type some called a skimmerton band. Their main function was to make a loud noise to embarrass women who had been unfaithful to their husbands.

A more formal band, with uniforms, was set up in the 1880s and this became the Market Lavington Prize Silver Band under the direction of bandmaster, John Merritt, until the 1950s when it was disbanded. Before the end, John Merritt appeared and played on TV and we have a newspaper cutting about this.