One of the most altered parts of Market Lavington is the Market Place. There’s not a thing, in the picture below, which still remains today. In fact today, where these old buildings stood you find bungalows built in about 1960. Here we look back to the time when there was a fire station. Sadly, we don’t have an accurate date for this photo. It is probably from the 1940s, perhaps during World War II. 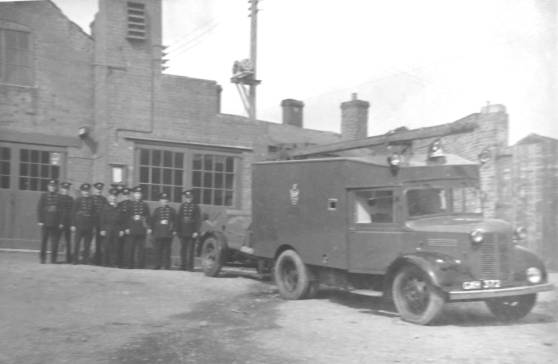 Outside Market Lavington Fire Station in about 1940

The fire appliance itself appears to be a small covered lorry. It has a ladder on the roof, a bright, roof mounted lamp and a bell, which in past times was all that was needed to warn other road users to move out of the way. The lorry has a towed trailer, which may be the pump mechanism, for delivering water onto a fire.

The men, all of them volunteers, stand outside the fire station in this clearly posed photo.

Market Lavington Museum has just been given a small bureau, which was used as a desk in the fire station. A display of fire station and engine memorabilia is on show in and around this bureau for the new season.