Market Lavington from the hill

Market Lavington is oft times called, ‘The Village under the Plain’. Salisbury Plain, and in particular Lavington Hill looks down on the village and since photography began it was an obvious location to set up a camera and take a picture. There are many variations on this theme with photos taken in different years, at different times of year and pointing in different directions. We have quite a collection of such photos, many of which were offered for sale as postcards throughout the twentieth century. Today we are looking at one which really is just a bit fanciful. It is a hand colour tinted version of a photo. We have it dated at early twentieth century. 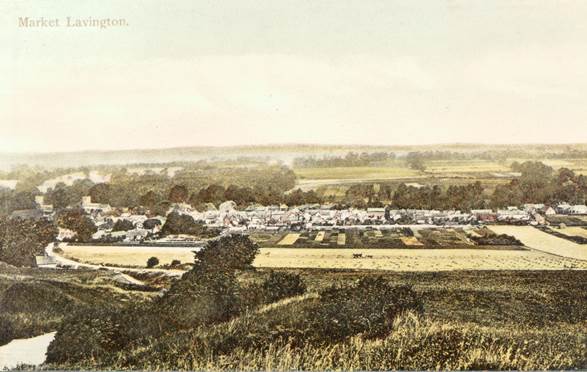 Lavington from the hill – an Edwardian hand coloured postcard

Our photographer – who was probably originally Alf Burgess, has stood half way up Lavington Hill. An artist has added colour to the photo, possibly based on notes written down when the photo was taken or possibly he has just guessed what colours to use. It is, presumably, high summer, turning into autumn for a corn field is being harvested and appears to have sheaves of corn in it. It looks as though people on the right of the scene are standing them up in stooks.

The colours do not ring quite true. Houses in the village look too bright and white. The foreground appears too dark and black. But let’s applaud the effort to add colour to a scene at a time when photography was only in monochrome.