Photos published in newspapers are never of the best quality and certainly were far less sharp in time past. To many of us, 1967 may sound like yesterday, but it was 48 years ago. This photo has just turned up. 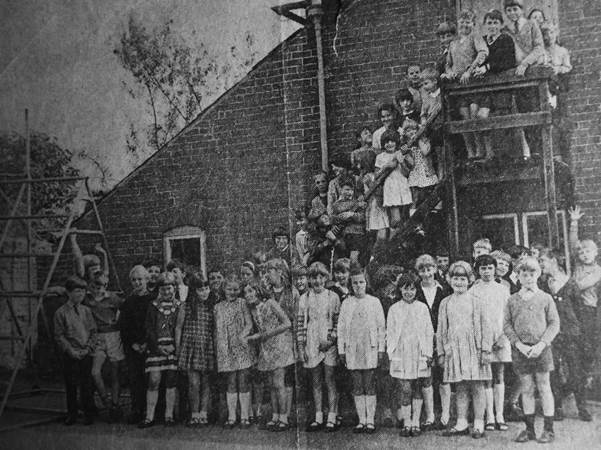 Now that’s a fascinating photo for us because the building in the background is our museum. Back in the 1960s Market Lavington was expanding and the old three room school was not able to cope. So the old school master’s cottage was brought into play as extra accommodation. Nancy Cooper, school secretary had her office in the building and rooms were used for craft activities. A TV was installed as well so that classes could watch appropriate schools’ broadcasts.

The outside stairway, no doubt familiar and useful at the time, no longer exists.  It looks a tad open sided for some of those little children. Actually, that lean-to on the left hand end was completely replaced when the building became the museum in 1985 as well.

The photo is captioned and tells us that these were some of the prize winners at Market Lavington School. Some of the proud mums and dads surely bought a print of this photo from the newspaper office. Now that would give us a much better copy if we could beg or borrow such a photo.

Names of pupils would also be appreciated.