It might be best not to think what happened to Market Lavington’s human effluent prior to the completion of the sewerage scheme, which was in 1958 – but of course, we will think of it.

In times past, most people had earth or bucket closets and either emptied the contents themselves, or paid somebody else to do the dirty work for them. The human waste found its way to allotments, fields etc.

Then it was realised that streams through the village were available for use as open sewers and people started installing flush lavatories with drains leading straight to the stream. This can hardly have been hygienic, but the stream soon carried its load away and no doubt, with a small population, the waste was soon diluted enough to be no real problem.

But in the 1950s that changed. Sewers were laid and a plant to treat the waste was built near the old brickworks site. The outflow from houses was connected to the new pipe network and Market Lavington, for most people, was on proper mains drainage. Mind you, even in 2011, there are still properties that are not on mains drainage and new houses continue to be built that rely on the locally installed septic tank to deal with sewage.

But we return to a scene, probably in 1957, and we see the main crossroads in the centre of the village (Lamb Corner) completely closed by the works. 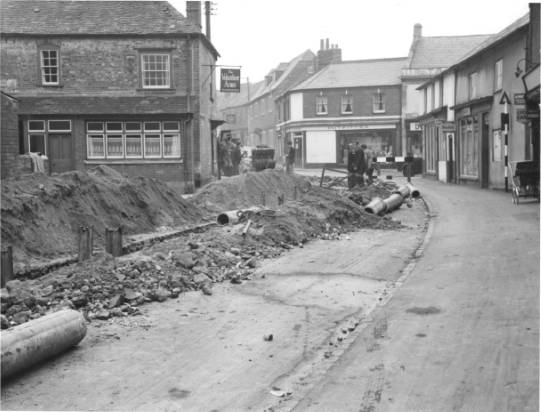 Sewer pipes being installed on Church Street, Market Lavington in about 1957

Our photographer – probably Peter Francis – is on Church Street, where a prominent building on the corner of Parsonage Lane was The Volunteer Arms. 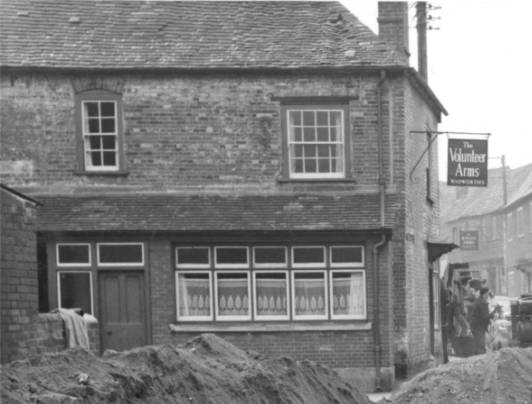 The Volunteer Arms which was, in 1957, a pub on Church Street, Market Lavington

Under The Volunteer Arms sign, we can look up High Street and there is The King’s Arms sign.

The King's Arms can be seen - a former pub on High Street, Market Lavington

If we look back to the corner with White Street we can see that Mr Hayball had the shop on the corner, now occupied by the hairdressers. 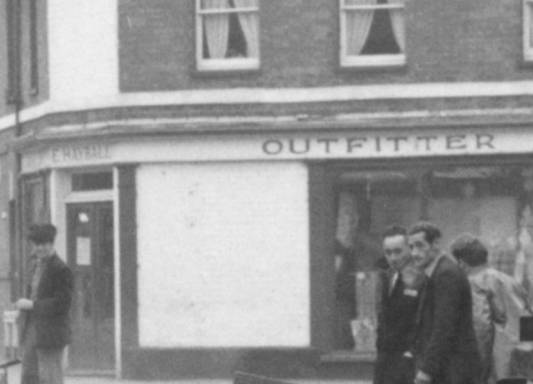 Mr Hayball's shop was on the corner of High Street and White Street in Market Lavington - where the hairdresser now operates.

Back onto Church Street where we see Peter Francis’s shop with the Kodak sign between two Lyons Cake shops. 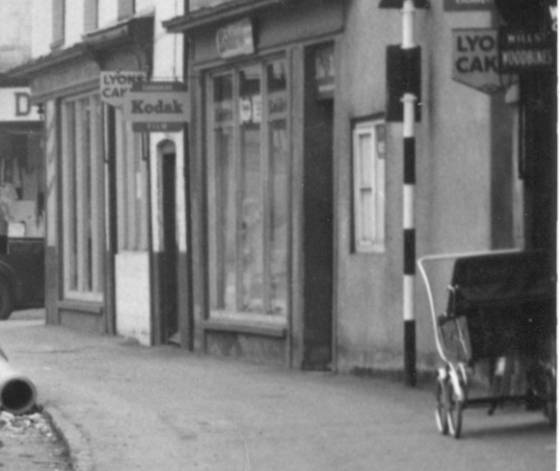 This photo certainly highlights the declining face of commerce in Market Lavington, for both pubs mentioned have gone, with the King’s Arms undergoing a change to residential use in 2011 and the Volunteer long since converted. The Church Street shops have all gone too so only Mr Hayball’s old shop, of those depicted, is still a place to go and buy something. But Market Lavington is still well served, for we have our Co-op, our butchers, our chemist, our newsagent and our post office stores and we still have two pubs in the village. There are also various take-away food premises. It means daily needs can be met within the village.