Yes, it is June and June is fete season here in Market Lavington as well as elsewhere across the country. This year the fete, organised by St Mary’s Church, will open at 2pm on Saturday 12th June at the usual Clyffe Hall venue.

Market Lavington Museum will have a stall at the church fete where, once again, visitors will be invited to guess or know what various odd artefacts from the museum were used for. There will also be plenty of photos to look at and the Market Lavington history book, ‘Village under the Plain’ will be on sale too.

But let’s take a look at a fete of almost fifty years ago. In 1961 the local ‘Wiltshire Gazette and Herald’ reported that Tom Forrest opened the fete. 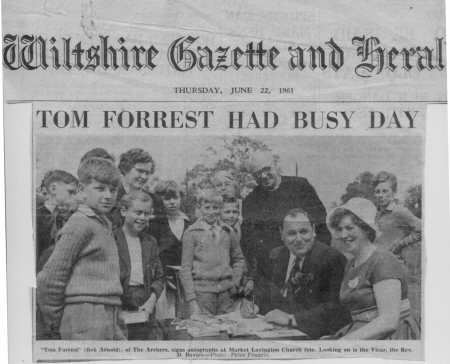 Tom Forrest, of course, was not a real person, but a character from a soap opera – a soap opera on the radio, which still goes strong today. He was a character in ‘The Archers’ – no less than the brother of Brookfield Farm’s Doris Archer. For many years Tom Forrest had the task of introducing the weekly omnibus edition on Sunday mornings as well as being a character in the series.

Fifty years ago, television soap operas were in their infancy and a radio performer, such as Bob Arnold who played Tom Forrest, could pull the crowds. Bob was actually a Gloucestershire folk singer by origin, but Tom Forrest became much of his life for 47 years.

The press cutting, in Market Lavington Museum, also shows the vicar at the time, The Reverend Daunford Davies plus many other unnamed people. The photographer, Peter Francis, ran his photographic business in the village for many years.

But let’s look forward to the 12th June where we hope to see you at the village fete of 2010.