Stonehenge has been a mecca for tourists since Victorian times. Mass tourism is said to have started on May 29th 1878, as explained in this extract from The Guardian website at http://www.guardian.co.uk/uk/2004/nov/22/arts.artsandhumanities

By 1878 mass tourism arrived in the form of the entire village of Market Lavington. On May 29 they paid a shilling and thruppence each, and set off at 7am in a cart drawn by a steam traction engine, the first in Wiltshire, owned by their local brickworks owner Edward Box.

The engine’s top speed was 4mph, so their 28-mile round trip took most of the day. By then the stones already had an official photographer, one William Judd, who churned out tourist souvenirs from a horse drawn caravan on the site.

Some clarification may be needed.

One rather doubts if it was the entire village for over 1000 people lived in Market Lavington at the time and the price – about 6p in current money was more than most would afford. It was William Box who owned the brickworks. His son, Edward, was a traction engine enthusiast who set up a haulage business later, in Liverpool. It was Edward who organised and ran the trip.

The trip was organised as a fund raiser for Market Lavington Band – William Box was a member.

A photo was taken of the engine at Stonehenge. Whether this was by the Mr Judd mentioned in the Guardian article, we do not know. 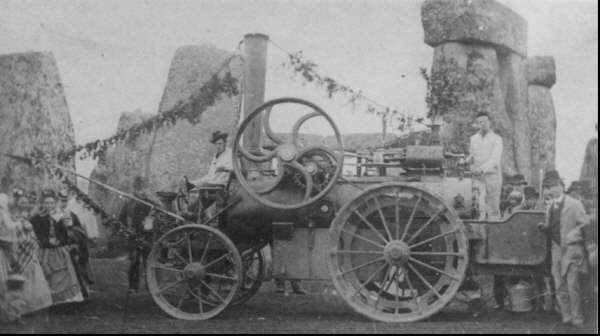 This must have been an amazing occasion. Market Lavington was not on the railway network until the twentieth century so mechanically powered transport would have been a total novelty to many. The route taken would be a novelty to people today, for this was before the takeover of Salisbury Plain by the war department. So, the traction engine would have made its way up Lavington Hill and then gone straight over the plain. Presumably, water was available at the farms on the downs – New Farm and Candown Farm to name two – to replenish the boiler. Then, still in Market Lavington parish, the land train would have reached The Drummer Boy Post, and then arrived at ‘The Bustard’ before getting to what is now Airman’s Cross and then Stonehenge.

We will see some of these locations at The Museum Miscellany on 17th September as we tell the Legend of the Dead Drummer. We hope to see you at Market Lavington Community Hall for this event at 7.30 pm