If Hitler had managed to invade Britain during the second world war then Market Lavington was ready, along with the rest of the country, to put up some defence. Here in Market Lavington we had the number 1 section, number 2 platoon of the Home Guard.

This body of men have become castigated as ‘Dad’s Army’ and there is no doubt that the workings of Captain Mainwaring’s TV platoon make very good comedy. But the truth was often that these small but dedicated groups of volunteer soldiers were well trained and ready to take on any invading enemy, although many were past the first flush of youth.

Market Lavington Museum has a photo of the platoon taken in November 1941. 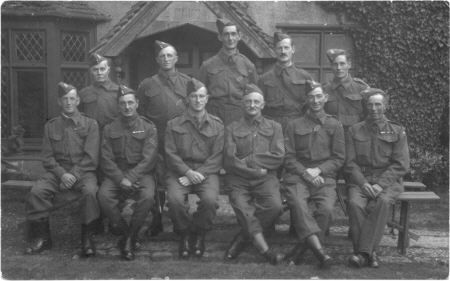 The photo is taken outside ‘The Old House’ and on the original photo you can read the ‘restored 1873’ inscription above the door.

Our Market Lavington men were:-