Today we show another of our receipts kept by Holloways of West Lavington and now findable at Market Lavington Museum. Today we look at a receipt issued by Merritt Brothers who were farriers and general smiths. 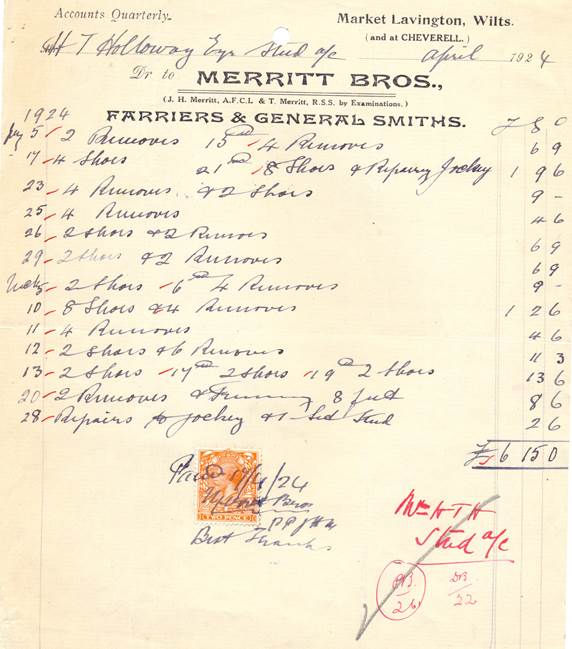 We can see that the Merritt brothers were J. H. and T Merritt and each had smithing or farriery qualifications. We can also see that they operated in Cheverell as well as in Market Lavington.

The year for this receipt was 1924 and the Merritts clearly relied on word of mouth for trade. No phone number is given, probably because the blacksmiths didn’t have one at that time.

The Merritts had premises alongside Broadwell which no doubt gave them a plentiful supply of water for quenching red hot iron.

It looks as though it was quite expensive for Mr Holloway to keep his horses shod. We don’t have any farriers at the museum but we think that most of the work done had been ‘removes’ and ‘shoes’. Removes have been charged at 1/1½ each and shoes at twice that – 2/3. In decimal money this equates to about 6p for removes and 12p for shoes. But of course this was in 1924 and the equivalent cost today would be about £9 for removes and double that for shoes.

We love these receipts at the museum. They provide a link to past times, to businesses long gone and to skills no longer practised in the village.