A millennium project in Market Lavington was to photograph everybody (or as many people asd possible) outside their house or premises. We have the photos in the museum and they provide a snapshot of who was where in the year 2000.

So here we have Mr Parker, the pharmacist, outside his shop on the corner of Market Place and High Street.

Mr Parker outside his chemist’s shop in the year 2000

Up until about 1960 this site had a different building which had been, amongst other things, a café, a Post Office and a bank. The old Tudor buildings were pulled down to make way for the expanding Wiltshire Agricultural Engineering business. This spot often had a brand new Massey Fergusson tractor parked on it as a kind of advert but the general area was a car park for the company. The new shops and Rochelle Court were built in the late 1980s.

These premises are still a chemist’s shop.

But back in 2000 the volunteer photographer also took a shot of Mr Parker in the shop. 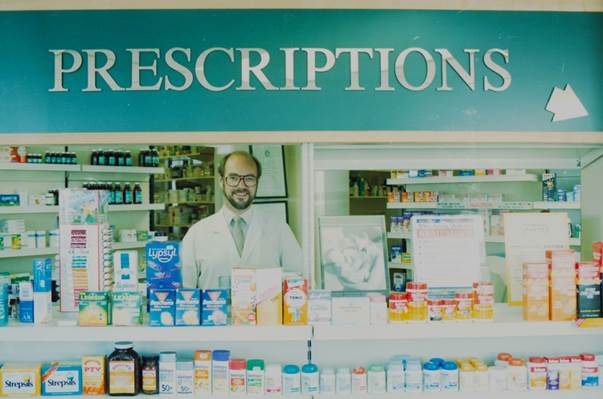 and behind the prescriptions counter

Now that photo didn’t make the cut as it were – we have a negative but not a print. But we think it is good to see what the inside of a shop was like. It’s definitely one to keep for future generations.