The Museum Miscellany, now in its fourth year, has become a part of the social scene in Market Lavington. It seems to be a case of ‘be there or be square’. OK, perhaps it’s the opposite for by and large the clientele is not from the younger generation although, of course, there are exceptions to that.

This year over 100 people crowded into our wonderful Community Hall. Rog, our curator, who does most of the presenting, says it really is a humbling experience to see so many folks there to hear him – and to pay good money for it.

Rog grabbed this photo of audience just before the start. 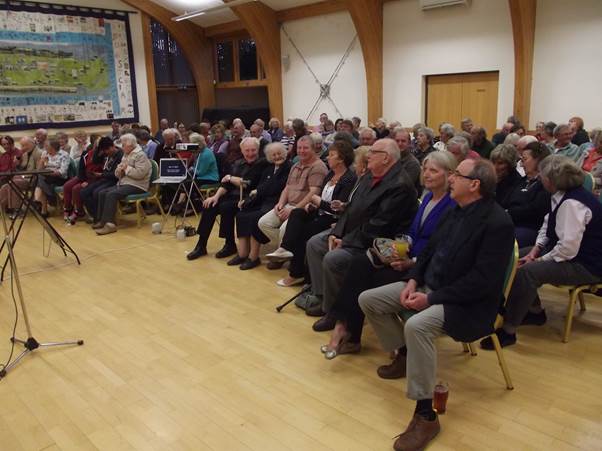 There’s not an empty seat. The front row is filled with museum friends one of whom, May, sitting just beyond the computer deserves a special mention. Do we bandy a woman’s age? Let’s just say that May’s memory stretches back into the early 1920s. Rog was delighted to realise she was there for he had a photo of her in the ‘Church and Chapel Life’ section. It showed May and others on a church choir outing, paddling in the sea. They were all holding dresses up to avoid them getting wet and in some cases revealing just a little more than perhaps they intended. May did laugh when she saw it.

At the very end of the front row we see Philip who, along with other members of the family has made many donations to the museum. The ‘Phantasmagoria’ projector, which Rog used to wrap up the show, came from his family, along with many photos.

Also in the front row is Pat. Rog often turns to her when he needs people in photos identified – but then so many locals, in the audience, are helpful to the museum. Rog has what he calls his experts. Arthur, who is somewhere in the audience knows all there is to know about wagons. Philip (a different one) can be relied upon for farm help. We do have a wonderful local community.

This year Rog passed the microphone to Hugh who has a real in depth knowledge of the Saunders family who had a huge impact on the locality, Britain and the world. We can see Hugh in a darkened hall making his contribution. 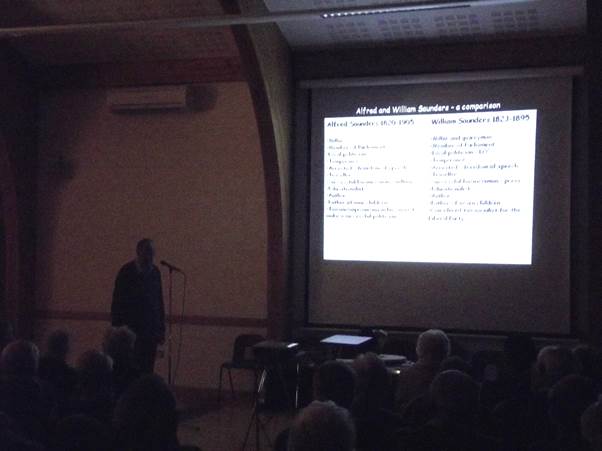 Hugh passes on his knowledge of the Saunders family

Well done Hugh. We thought it was great to hear a different voice able to speak with such authority.

But of course, it wouldn’t be The Miscellany without the Museum Food. Each year our team of volunteers produce a finger buffet composed of items in Museum recipe books. The interval is a major part of the event as people can circulate, chat and enjoy sampling the food on offer. We can only hope there was enough this year for it all seemed to go so well done all those chefs who make such an enjoyable part of the evening.

We at the museum would like to thank all those who made this event such a success.

As the event continues to be so popular we plan another for next year. There’s no fixed date for it as yet. But we will look at early October as a possibility. It will be on a Saturday night since all the weekday nights are booked in the hall.

A major theme of next year’s event will be World War 1 – marking the centenary of the start of that awful conflict.