Today we are looking at a card sent to a Miss Hiscock in Winchester. It isn’t the first time we have done such a thing, but this time the address on the card matches one we can find in the 1911 census so we know who this particular Miss Hiscock actually was.

Let’s start with the message side of the card. 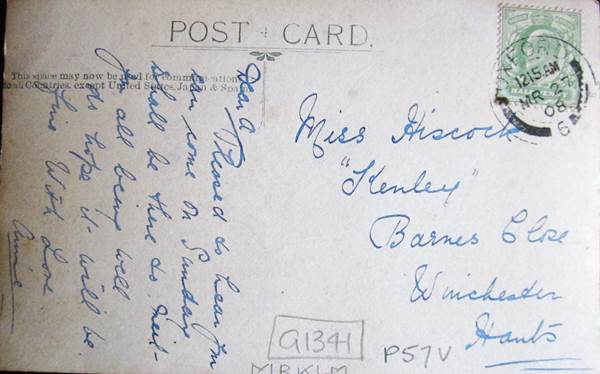 We can see this card was posted in Oxford on March 27th 1908. The message is short and tells us little. We have to remember that the Edwardian postcard was very much the text message of the time. It appears to be confirming an arrangement for ‘Annie’ to meet Miss A Hiscock. But that address matters, for we can identify from it that this was Alice Mahala Hiscock, born in 1882 in Market Lavington.

Alice’s parents were James and Amelia Hiscock and they lived at the Easterton end of Market Lavington High Street. Market Lavington born James was a blacksmith/engineer. Alice lived all her childhood in Market Lavington and we guess she attended the village school. In 1901 she was described as a domestic servant but she was living with her parents.

For the 1911 census, Alice was the cook for John Shawcross, a clerk in Holy orders who lived at Kenley, Barnes Close, Winchester.

We believe Alice married Wilfrid Waters in 1914. She died in 1975 in the Trowbridge area of Wiltshire.

And now let’s see the front of the card. 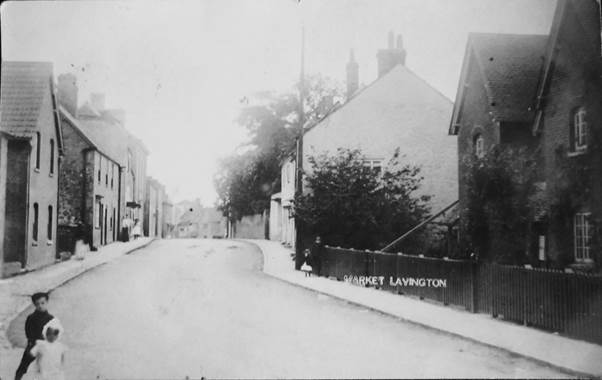 This card shows the part of High Street, Market Lavington where Alice lived as a girl

This would be a good choice, for we think the Hiscock family may have occupied one of the cottages on the right hand side of the road. It’s just possible that people in the picture are Hiscocks.