More from a carnival

Some time ago we showed a picture of youngsters dressed for a carnival in 1927 (click here). We believe this photo dates from the same occasion It would seem to include some of the same people. 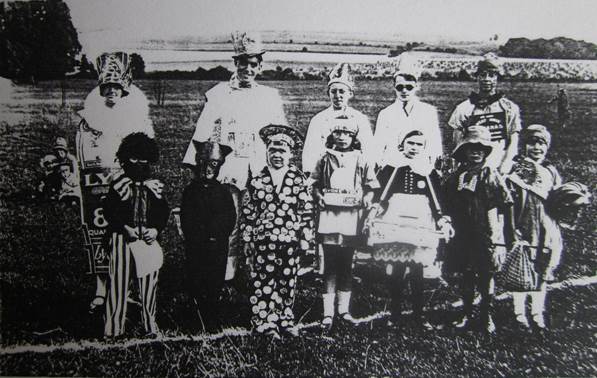 Fancy Dress for a 1927 Market Lavington and Easterton Carnival

Sadly, we don’t have an original photo – just a photocopy and that means it is not the best quality image. But we do have some of the people named or partly named.

In the back row, from the left, we have Mrs Hatswell. This, we guess was Clara who lived on High Street. The tall man is not known. The next person has the name Arnold (probably his surname) and then there is Bill Hobbs. The final back row person is a Davis.

In the front row there is the golliwog who may well be Bob Drury for that is the name we have on the other photo. The animal mask and the pearly king are unnamed and then we see Iris Burgess. We do not have names for the last three people.

We’d like to thank Mrs Jean Holt for making these images available to the museum (nearly twenty years ago) and for providing the information.