Some readers may recall that on January 1st 2013 we showed a picture of ‘Easterton Fire Brigade’. It was clearly some kind of carnival item but we had no idea when or why or who was involved.

A blog comment suggested it was after World War 1 to judge from the souvenir helmets some of the men wore.

But now we have much more information along with a second picture of the same ‘Easterton Fire Brigade’.

This picture was made into a postcard so it has a caption which gives us a date.

So, the ‘New Engine and Brigade’ were a creation for the Coronation Carnival of 1937’

This picture is taken from the other side of the ‘appliance’. We see that the hon. Sec. of the brigade was a rather dubious character

I Doubtem was said to be the Hon. Secretary

Our donor for this picture tells us that he was led to believe that the driver was his Uncle Jack – Arthur John Spencer. He’d have lived and farmed at Halstead Farm on Easterton High Street at the time.

The other men are still not known and maybe we’ll struggle to identify them under the false whiskers. But once again, we’ll try. Can you name these men? Of course we now know the photo dates from 1937. 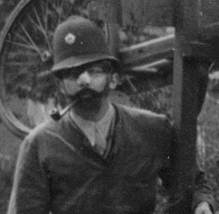 Can you name any of the men?