Potter has been a common surname in Market Lavington. Mr Edwin Potter, who ran the horse bus service to Devizes, had a large family. Here is one of his sons, also called Edwin and his wife. The photo was taken at Easter in 1925. 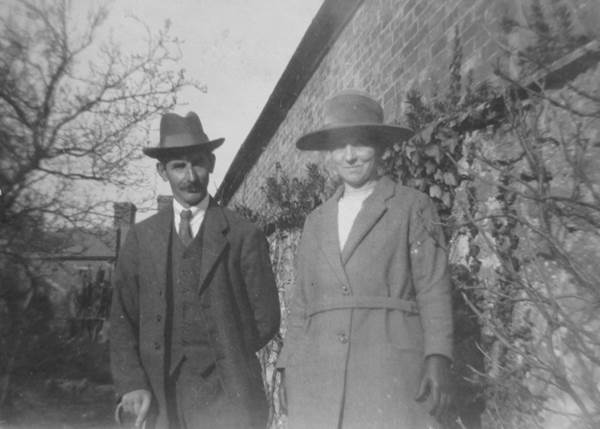 Edwin was born in around 1875 in Market Lavington. By 1891 he was helping his father in the bus trade and, no doubt, also on the Potter farm.

Edwin married Mary Ann Pike in 1903. Their first born daughter was Helena May Potter who was to become that enormously long time infant teacher, Mrs Elisha.

In 1911 Edwin was described (presumably by himself) as a farmer’s son working on farm.

Later, we know he worked as a gardener at Clyffe Hall and also as a groundsman for Dauntsey’s School. He constructed the up and down footpath (not public) that linked Market Lavington Manor with Lavington lane. Older residents still refer to the path as ‘Potter’s Steps’.

Edwin and Mary Ann lived on Parsonage Lane, next to the Racquets Court. The topiary in this garden has featured before on this blog. You could click here, here or here to see that grand bit of clipper work.