He was born in about 1873 in Rutland. It was after 1911 that he took over the butchery business in Market Lavington.

Unfortunately, Edward must have developed an illness for in 1935 he spent time in the Forbes Fraser Hospital in Bath. This hospital, more or less on the site of the present Royal United Hospital had opened in 1924 and was, at the time, deemed a very up-to-date place.

1935 was, of course, before the 1948 founding of the National Health Service. Edward had to pay for treatment which must have proved a major expense.

Here we see the receipt he received for payment for one week in the hospital. He actually stayed there for more like three weeks. 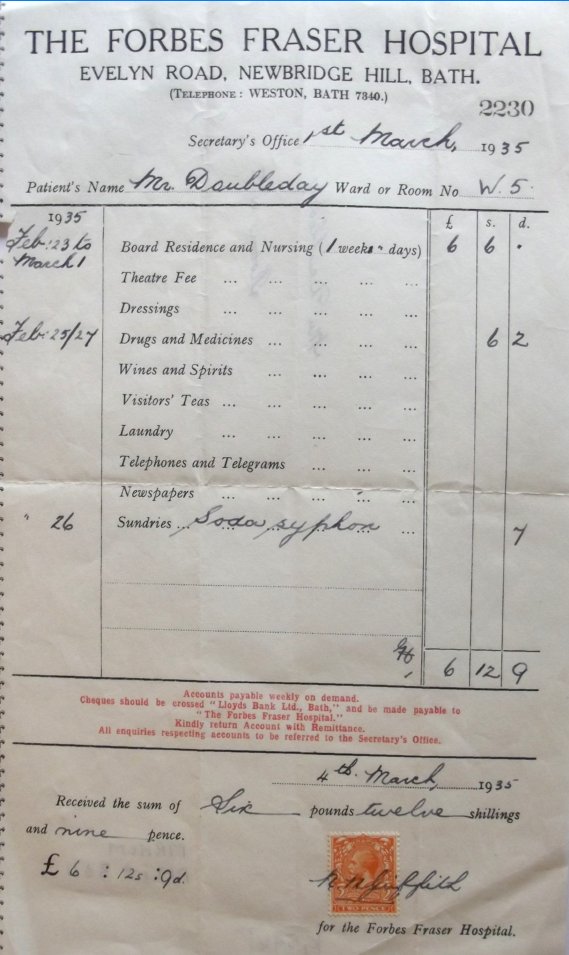 Receipt for treatment of Market Lavinhgton Butcher, Edward Doubleday, at the Forbes Fraser Hospital in Bath

We can see that the total bill for the week came to six pounds twelve shillings and nine pence. As a proportion of income, that’s equivalent to more than £1000 today. Yet, as we see, most of the cost is for board and lodging and care by nurses. Our Edward had just six and tuppence spent on him for medicines and he presumably fancied some soda water and spent seven pence on that.

It seems probable that Edward had an incurable condition for he died the following year, aged just 63. He is buried in St Mary’s Churchyard, Market Lavington.