Mr Sayer’s Bus, The Volunteer Arms and the Prize Band

This photo shows a number of items in Market Lavington which have become past history. 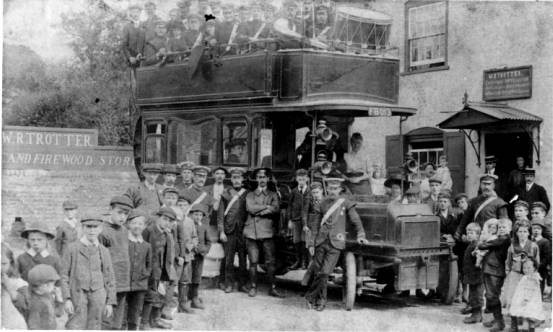 Mr Sayer's motorbus with Market Lavington Prize Band on the top deck in 1912. The photo was taken at The Volunteer Arms

The centrepiece of the image  is Mr Sayer’s bus. The photo dates from 1912 when the presence of a motorbus was something new. Fred Sayer had seen a gap in the market, linking Market Lavington with Devizes more quickly and with a bigger load than Mr Potter’s horse bus, which had been making the journey for more than twenty years.

Motorbuses still make the journey, of course, but the old Lavington and Devizes motor company is long gone.

The band was, perhaps, in its glory years. John Merritt was the bandmaster and had led the band to a first prize in a competition, a couple of years earlier.  This gave them the right to call themselves a prize band. The bandsmen, with an enormous bass drum (not the one we have in the museum) have squeezed themselves onto the bus’s top deck. 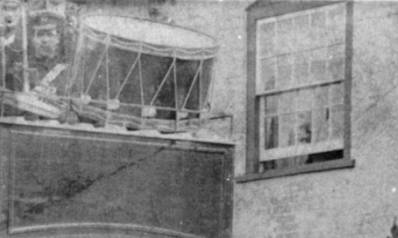 The next to back man on the bus looks like John Merritt.

The Volunteer pub had been called The Angel in earlier times. It survived until the 1980s. When it closed, there were still three pubs in Market Lavington.

At the time of the photo, the landlord was Mr W R Trotter and we can see he improved his income by selling firewood as well. 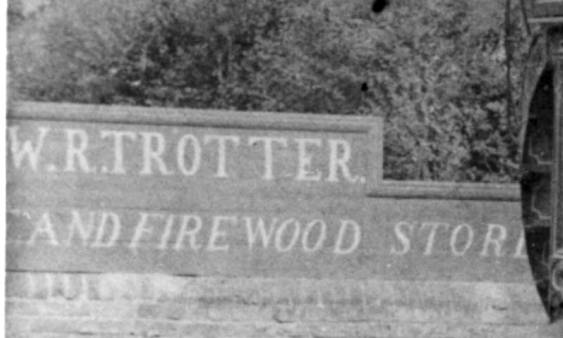 We have already recorded a little of William Trotter’s life here.

Mr Sayer is an amazingly unknown quantity to us at Market Lavington Museum. We have numerous photos of members of the Sayer family but know nothing of their origins. Can anyone out there in Blogland offer any help?