Fred Sayer was the first person to operate motorbuses in the Lavington area. He set up business, originally operating from the yard of the old Volunteer Arms in about 1910 but later he acquired much larger premises in the Market Place. Mr Sayer’s company became the Lavington and Devizes Motor Services Ltd with the ability to transport up to 600 people at a time.

A museum friend in Easterton was recently seeking a newspaper report for a family wedding when they came across this advert in the Wiltshire Advertiser for Tuesday June 9th 1932. Of course, we at Market Lavington Museum now have a copy.

This advert makes an interesting comparison with a similar ad, which we had from 1924. 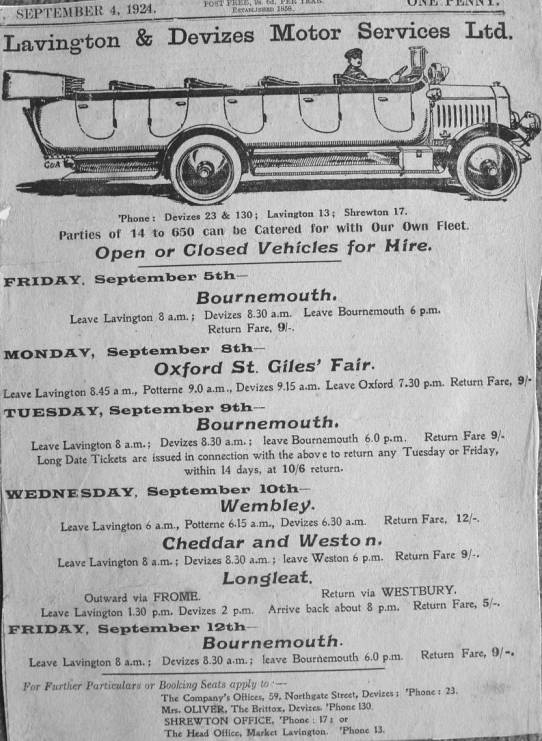 1924 advert for trips on Mr Sayer's coaches. Both ads are at Market Lavington Museum

We can see a considerable improvement in coaches over that 8-year period from 1924 to 1932, but surprisingly, the fares charged went down by about 30%.

If you’d like to know more about Mr Sayer’s bus company then do come to our ‘Museum Miscellany’ on Saturday 18th September at 7.30 in the Community Hall in Market Lavington. This will include a feature on transport in the area.

Local residents might also like to note our next event – an entirely different ‘Potter in the Past’ – a history walk in Market Lavington on 11th July starting at 10.30am at the museum and finishing with sausage and chips at The Green Dragon.