Mrs Burgess and a baby

The Burgess family feature quite often in these pages. Not surprisingly, there are plenty of photos since two generations of the family were the professional photographers in the village. Here we see one of the older photos and it shows Marion Burgess, the Scottish born wife of Alfred. She is nursing a baby. The Burgess family lived at 13 High Street and Alfred had a studio in the back garden. This photo was taken there. 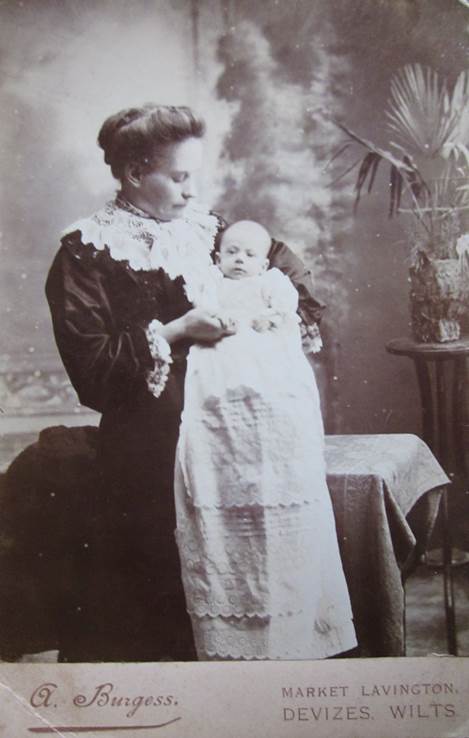 Mrs Marion Burgess of 13, High Street, Market Lavington with one of her babies – late 19th century.

The only date we have is ‘late nineteenth century’.  Alfred and Marion had six sons who could fit the bill here. Robert (also known as Robin) was born in 1889 followed by Alfred, John, Hugh, Alan and Charles. I wonder if any descendant out there in blogland might recognise which boy this one is.

Meanwhile, enjoy the beautiful gown the lad is wearing. Perhaps this was the Christening gown and in that case it may well have been worn by each boy in turn. Marion looks well dressed as well.

Alfred, the photographer died in 1918, but brothers Robin and Alfred (known as George) continued to trade as Burgess Brothers with Robin behind the camera and George in the darkroom.