During the middle part of the twentieth century, the butchers’ shop in Market Lavington was trading under the name of Doubleday and Francis.

Today we are looking at Mrs Doubleday. 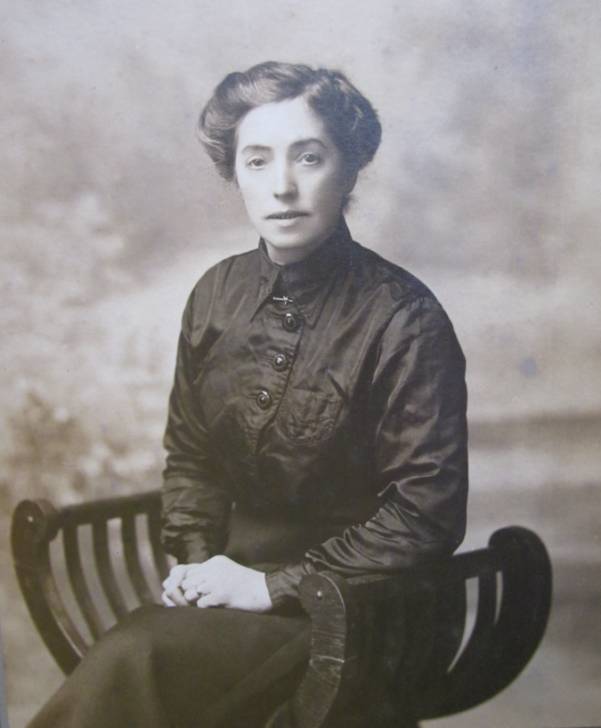 The early life of Mrs Doubleday was spent in Northamptonshire as Ellen Maria White. A brief biography follows.

Ellen Maria White was born in about 1868 in Northampton. In 1871, aged 3, she lived with her parents, two older siblings and a baby brother at Number 1, New House on Harrowden Row or Road, Wellingborough in Northamptonshire. Her father, James, was a 32-year-old stonemason born in Northamptonshire. Her mother, Elizabeth was 33 and came from Denton, the same village as her husband. Of the children, 8-year-old Thomas had been born in Denton and 4-year-old William in Leicester. Baby Harry, one month old had been born in Wellingborough.

In 1881 the family were still on the same road although their house was now number ten. James was still a stonemason. Ellen, aged 13, was a scholar. Two more young boys had been born and Ellen’s grandmother, Bertha White was with the family when the census was taken.

Edward Doubleday married Ellen Maria White in the April/May/June quarter of 1895. The marriage was solemnised in the Wellingborough district of Northamptonshire.

In 1901 Edward was a butcher living and working on Church Street in Brixworth, Northamptonshire. The census records that Edward was aged 28 and had been born in Stretton in Rutland. He was an employer, working at home. Ellen, his wife, was aged 30 and she had been born in Northampton, as had the couple’s three-year-old daughter, Mary. Edward’s sister was with the family at the time of the census. She was 24-year-old Kate Doubleday from Stretton. The servant, 23-year-old William Hasting was described as a journeyman butcher from Clipstone, Northamptonshire.

In 1911 Edward was still in Brixworth. His family do not seem to be with him. Ellen and daughter Mary were in Wellingborough in Northamptonshire.

Just when the Doubleday’s moved to Market Lavington we do not know, but a slaughterman’s license was issued to Edward in 1925. 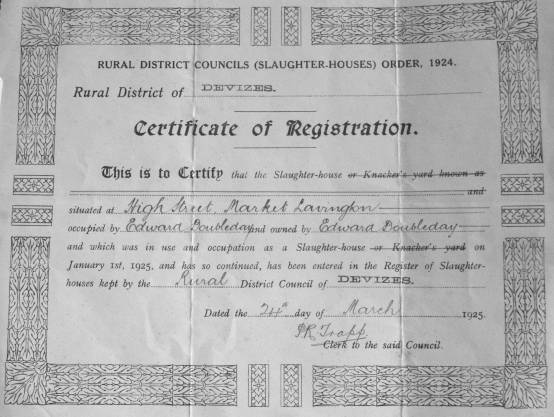 Mr and Mrs Doubleday are both listed as electors in 1926, with a High Street, Market Lavington address.