This photo dates from the time of the Second World War and features a Mrs Drury of High Street in Market Lavington with four evacuee children, all looking a bit miserable, it has to be said. The little ones had been sent from their own homes to an unknown destination where local residents cherry picked children to live with them. Some of the youngsters were lucky and formed lifelong friendships with their foster parents, brothers and sisters. Others were less fortunate. We have no idea how these children fared but they appear to be well looked after. 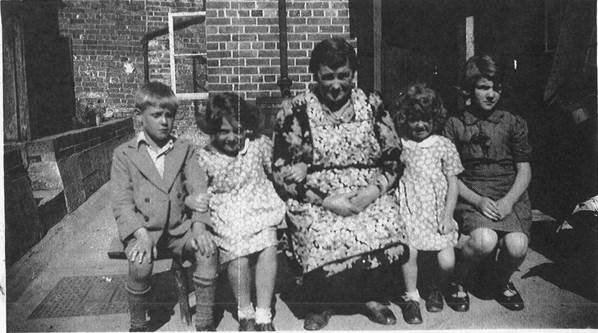 We are very short of information on this photo. We think Mrs Drury might be Constance Ethel, known as Ethel whose husband was Bill Drury. They had a house on High Street at the time the 1939 electoral roll was drawn up. But also on that list is a Marjorie Helena Drury of High Street so it could be her.

If anybody can tell us any more we’d be delighted to hear from them.