Regular readers of this blog will recall the wonderful wedding smock made for pond digger, Charles Smith by his bride. (Click here to see it). 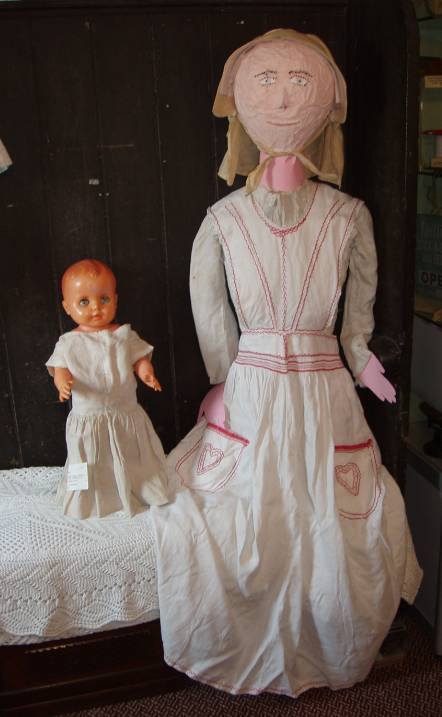 Here is Mrs Smith, wearing a pinafore, which she also made. Obviously the models are not real people, but the clothes – that wedding smock and the pinafore really did belong to a Mr and Mrs Smith. The baby in the photo above was just visiting at the time this photo was taken. Experts might note that the clothing on that doll is from the wrong period.

So let’s find out a little about Mrs Smith. Mrs Smith was born Mary Jane Edwards in Everleigh, a Salisbury Plain village to the southeast of Pewsey. She entered this world towards the end of 1854. Her parents were William Edwards and his wife, Mary. Both had been born in Everleigh in about 1825. William was an agricultural labourer.

At the time of the 1861 census, the family – our Mary Jane had two younger brothers – were living in Everleigh.

In 1871, Mary Jane was a housemaid working for a surgeon and his family in Ramsbury.

Of course, we do not know how Mary came to meet Charles Smith. Charles was a pond digger and they worked away from home, anywhere with chalk as the underlying rock. So possibly Charles was digging a pond in the Everleigh or the Ramsbury area. What we do know is that Mary Jane Edwards married Charles Smith towards the end of 1877. The marriage was registered in the Pewsey district, which included Everleigh.

But home for the couple was to be Charles’s village of Market Lavington. By 1881 the couple already had two children and Charles was employed as an agricultural labourer.

In both 1891 and 1901 Mary was at home with children whilst husband, Charles was away pond digging. Home, by then was White Street, which had become the hub of the Smith’s pond digging business. The same still applied in 1911, but censuses only apply to the one day in each ten years. Judging by children born the couple were very much together at other times.

The 1926 electoral roll for Market Lavington shows Mary Jane still on White Street although Charles had died a couple of years earlier.

Mary herself died in 1938. She spent more than 60 years living in Market Lavington.

And now, a representation of Mr and Mrs Smith sit on the settle in the museum, wearing clothes made by Mary Jane herself.