For many of us it would be a wonderful moment, if a deer chose our garden for a morning forage. By tradition, deer are delicate, graceful animals and a wonderful sight to see. We commented on a roe deer in our curator’s garden back in the spring – click here to see it.

Somehow, the muntjac does not quite excite the same emotions. This particular beast is regarded as a rather unattractive member of the deer family, with a huge ability to cause damage to our threatened woodland. The British Deer Society actually think that muntjac don’t do much damage, suggesting their worst economic impact is by collision with cars.

One reason for the disfavour shown to the muntjac is that it is a comparatively recent intruder. The deer is native to South Asia and it is believed that the present population – widespread through most of England, descends from animals which escaped or were released from Woburn in 1925.

But the main problem for the poor animal is that it just isn’t as pretty as other deer – or most people think that.

Take a look at this buck which wandered through our curator’s garden yesterday. 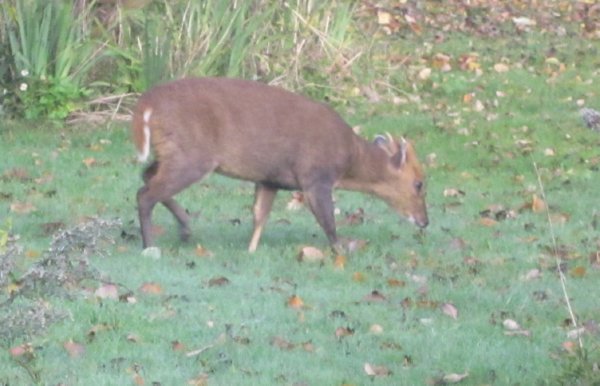 A muntjac deer in Market Lavington.

We know it’s a buck because it has little antlers. This was a hurried photo with the first camera that came to hand, but the deer showed no inclination to leave so Rog was able to get a different cammera which could gather more light and had a bit more zoom. 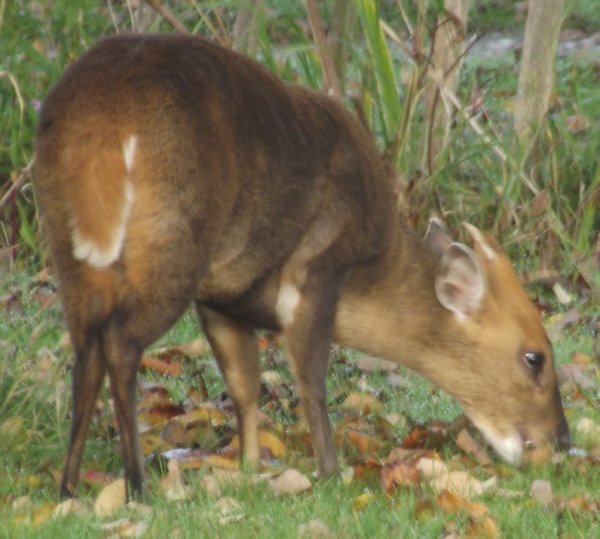 A closer view of the same deer showing antlers and tusks

We can see the little antlers and as our muntjac feeds on fallen leaves, we can see the fang like canine tooth as well. In fact the head has something of the carnivore about it. Muntjac are not carnivores.

Our curator is pleased to have another photo for the wildlife album which is building up a photographic record of Lavington plants and animals of the 21st century.

And it seems we should learn to love the muntjac – a much maligned species.