Not the Great Exhibition

The Great Exhibition of 1851 was a roaring success. This was the exhibition for which the huge Crystal Palace was built in Hyde Park. People flocked to visit it and, under the stewardship of Prince Albert it was seen as ‘the’ place to go. And people could get there for the new railways provided relatively rapid routes to London from all over the country. Of course the Crystal Palace was moved when the exhibition was over and gave its name to an area of South London.

It was inevitable that such a wonderful event would be repeated and so we come to the London International Exhibition of 1862.

If, reader, you have never heard of this event – vastly bigger than the 1851 exhibition – then you are not alone. It failed to inspire the great British public back then in much the same way as the Millennium Dome did 140 years later. It has largely been forgotten although the site it occupied now houses the Science and Natural History museums. The building itself was demolished and demolition materials were used to build Alexandra Palace in North London.

And what has all this to do with Market Lavington? Simply that a metal detectorist found a small medallion depicting the building and giving the date and name. 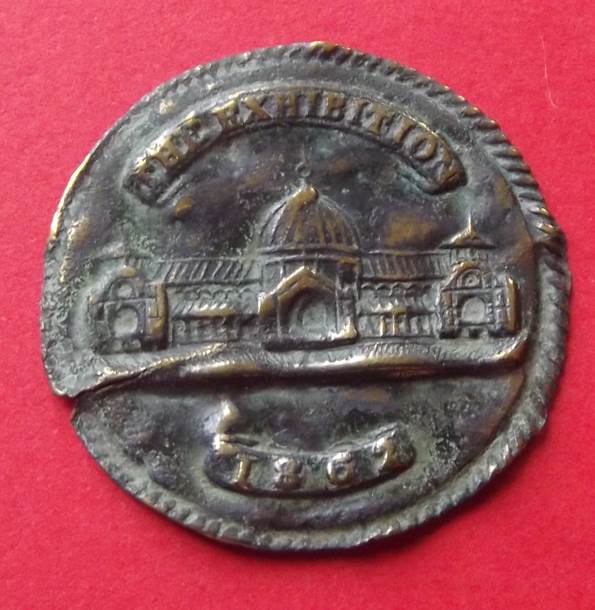 For a base metal item found in the ground it is in remarkably good condition It is about 2½ centimetres in diameter and as we can see from the damaged areas it is thin with strength provided as much by the embossing as by any thickness of metal.

Presumably somebody from the area actually went to the exhibition. Let’s hope they weren’t too sad when they lost this memento.