We have commented before that Parsonage Lane is not well represented in photos at the museum. Just recently this lack was slightly redressed with some photos at Number 2 – generally of a wedding but with one that showed the house. It has a big crease across the photo.

The photo was found in the house by the present occupant. He’s been in the house for fifty years and has allowed us to make copies. It stands to reason that the owner was not the original owner and he knows nothing about dates or people. But despite that crease, here is a lovely photo. 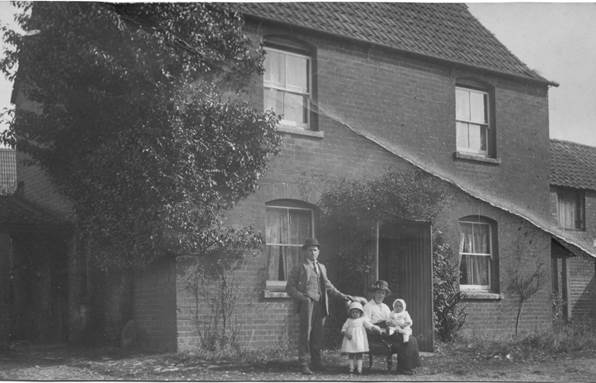 Number 2 Parsonage Lane in Market Lavington – possibly in about 1912

The house still looks much the same now. We can only guess at the age of this photo which could be the 1910s to 1930s.

At that time the house was occupied by George Cooper and family. George was a coal merchant. He married Mabel Brown in 1909. The family were at Parsonage Lane for the 1911 census and were there as shown on electoral rolls in 1926 and 1939. George died in 1956, still living at Parsonage Lane. Mabel followed in 1968 but she had moved to a smaller house by then.

It seems likely that the family here are George and Mabel with two of the children. 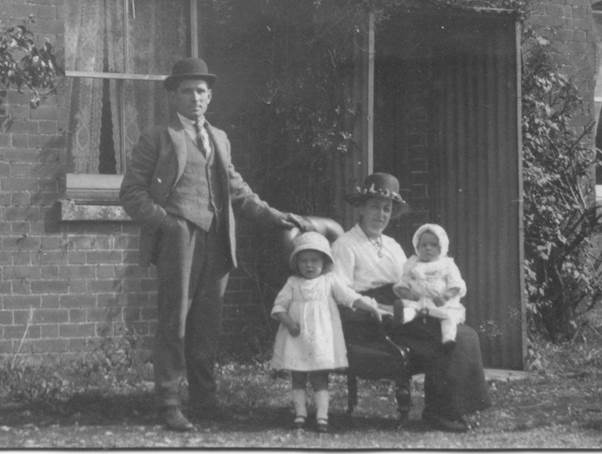 Are these people George and Mabel Cooper with two of their children?

The two children look to be girls. If all our guesses are right this would suggest this is an earlier photo.

But we’ll emphasise again, this is guess work. We have no other photo of George and family for comparison and this could have been visitors at the home.

And you may have guessed it by now – we hope you can help us with a positive identification.