We do like to ring the changes at the local museum – your museum. It is inevitable that some things are fairly permanently on display, but visitors from 2015 will spot plenty of changes when they make visits this year. One area which changes each year is the old oak settle. The settle itself dates from about 1800 but this is barely visible for we usually drape one of our large bedspreads over it. This year, the choice was obvious for that. It had to be the new and delightful quilt made by the Derby and Joan club in 1971. With it we have put the certificate it won in a Wiltshire wide craft competition and also some essays by Derby and Joan club members. This item is a duplicate and visitors are welcome to read and enjoy these tales from long ago.

The theme on the settle this year is beginnings and endings. On the left hand end we have Mrs Hiscock and one of her babes. The little one is wearing the Hiscock christening gown. On the other end we have Tom, the undertaker wearing his frock coat and a top hat. He carries one of his funeral record diaries and an order of service for a local funeral. We even have a grave marker number from the Drove Lane cemetery and a coffin plate. A widow (head only) looks down. She is wearing her widow’s weeds. 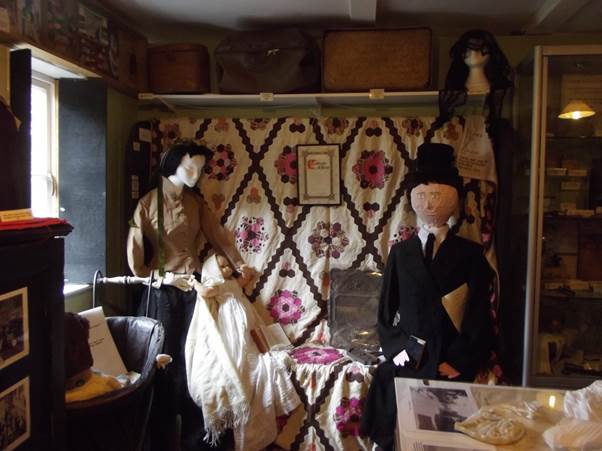 We think the effect is actually very attractive and charming. A photo really doesn’t do it justice so make a point of visiting this year to see it for real.