Today we are going to look at another of the lads from the 1919 football team we saw the other day. His name is Henry Cooper, not to be confused with his ‘slapping it on’ and much more famous boxing namesake. To avoid confusion I’ll call our footballing chap Harry for that was what he was usually called. 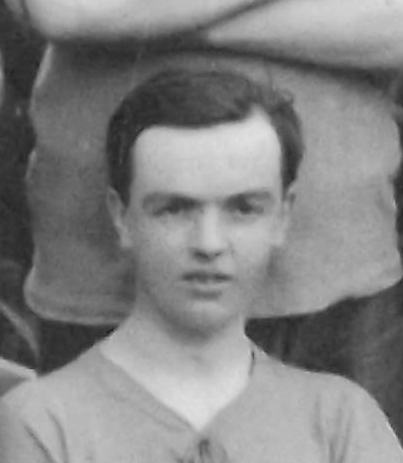 This is Harry who was aged about 19 or 20 when the photo was taken.

He was born in 1899 and was given an age of 1½ on the 1901 census. His parents were John and Elizabeth – both Market Lavington born. John was listed as a blacksmith and our Harry was the middle of three children born to the couple. The family lived in Market Place in Market Lavington.

Harry, had he been of a mind to, could have traced his Market Lavington ancestry back for generations. Father and Grandfather Cooper were Market Lavington born. Harry’s mother had been Elizabeth Hoare and she certainly had grandparents born in Market Lavington. She was with them at the time of the 1881 census.

In 1911 a bigger Cooper family still lived in Market Place. John was now listed as an agricultural engineer. Harry, aged 11 was a scholar. He was now the second of seven children at home with the parents. This census tells us that in 14 years of marriage John and Elizabeth had produced seven children and all were still alive.

In 1924 Harry married Edith Burt – another name with a good local provenance. We think she was actually a Devizes girl.

The 1926 electoral roll suggests that Harry was still at home with parents, in Market Place. Edith is not listed on this roll. She was under 30 and at that time only women over 30 could vote.

However, she is listed on the 1939 roll. She and Harry were at 9 Market Place. John, Harry’s father, was at number 3.

We believe that Harry and Edith had three children, Sylvia, Ivor and Honor.

By 1964 the old houses in the Market Place had been demolished. Henry and Edith lived on Northbrook, according to the electoral roll. We would now say that their house was on Northbrook Close.

Henry died in 1968. His address given as 2 Northbrook Close. Edith died in hospital in Devizes in 1984. Both are buried in St Mary’s churchyard.