Our Local Express at Market Lavington

Comic postcards, such as this one depicting an imaginary train, allegedly at Market Lavington became common in the Edwardian era. This card, at Market Lavington Museum, was obviously considered of interest and amusement value – sufficient to have it framed. That means we can’t look at the back of the card for any publisher marks or postage dates. 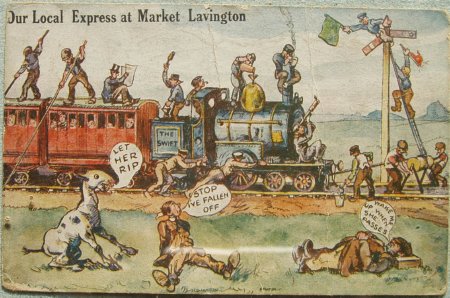 What sellers might tell us on internet auction sites can provide some information. A virtually identical card, but purporting to be a small town in Shropshire was posted in 1912. A card for the same town, along a long closed railway, was posted in 1918 and sold for more than £10. Another, but for the Isle of Wight, was posted in 1938. This one, offered for sale at the start of 2010 did not sell at the asking price of £2. We do not think that our card, battered and creased as it is, has any real cash value.

These cards were printed with the main image in large quantities and then cheaply overprinted with the text – ‘Our local express at …..’. The place name varied but in all other respects they were identical with the same foreground characters, one asking somebody to wake him up when the train passes. There are the same characters on the roof of the train attempting to keep it going with punt poles and the same green flagman perched precariously on the signal arm.

As far as Market Lavington is concerned, this card is really very unfair on the Great Western Railway. Our line was opened at the dawn of the twentieth century and was built as a main line, shortening the route between London to the West of England. Throughout its life, trains seen in the Lavington area have been modern for their day (although the present trains – the original Inter City 125s from the 1970s and 80s must now be nearing the end of their lives). Sadly, Lavington no longer has a station and the trains rush past The Folly and through Parham Woods in a cutting before getting onto the embankment that leads to Lavington Viaduct.

Rest assured, rail travellers – the old postcard we have in the museum, was never anything but a comedy card.