Today we look at another of the bills paid by Holloways of West Lavington. This time the recipient of money was James Neate. 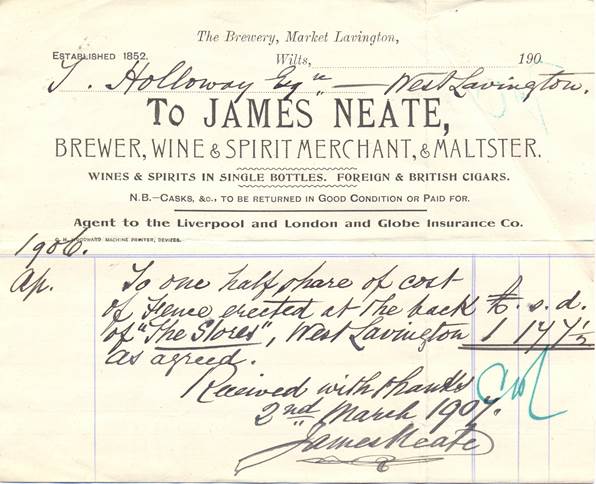 We can see that James Neate established his business in Market Lavington in 1852. We understand he came to Market Lavington on the strength of a proposed railway line. The line never materialised, but James weathered some financial storms and became well established in Lavington as a brewer, wine and spirit merchant and Maltster.

We see he also traded in cigars and worked as an insurance agent.

It has to be said we do not fully understand this receipted invoice for the half share of a fence at the back of the stores in West Lavington.  This might suggest that James had business interests in our neighbouring village.

As ever it is interesting to note that traders like James had to cope with substantial time delays before bills were paid.  This one is dated 1906 and maybe the Ap.  Means April. James received his money on 2nd March 1907 so perhaps for almost a year he had to make do without his rightful £1-17-7½.

In present day terms it sounds a trifling amount but in terms of earnings, that 1906 amount of money equates to about £1000 today. It was a load of money!

By the way, several of our James Neate items can be seen at present in Salisbury Library as a part of the Dusty Feet exhibition.